Tuesday, August 11
You are at:Home»News»Nation»Najib: I’m magnanimous for reconciliation 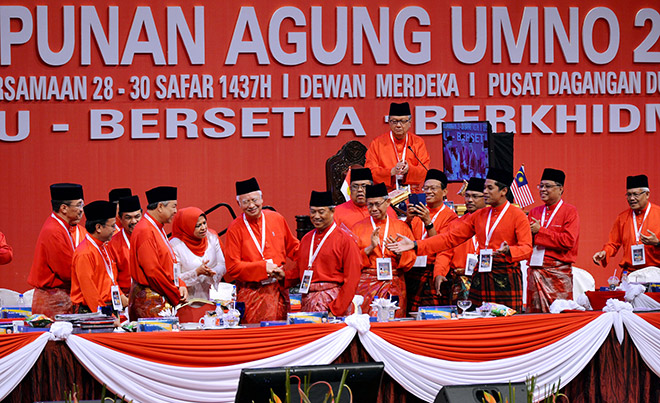 Najib shakes hands with Muhyiddin after his speech. — Bernama photo

The Umno president, who opened the door of friendship to his detractors on the last day of Umno General Assembly 2015 here, however stressed that if the offer was turned down, then they were not opposing him on a personal capacity but rejecting the Umno delegates’ wishes.

“I, Najib Razak as president of Umno, choose to be magnanimous to open the door of friendship to all so that we can be united and strengthen Umno ties,” he said, followed by cheers and applause from the delegates at Merdeka Hall, Putra World Trade Centre (PWTC) when delivering his winding up speech at the assembly.

“But I want to firmly state that if anyone continues to oppose and want to fight…this isn’t personal anymore.

“They are not just opposing me as Najib Razak, the party president, but they are also clearly opposing reconciliation and rejecting Umno’s decision,” he said.

Najib, who is also the Prime Minister, reminded the party members that internal disputes would certainly not benefit Umno.

“What’s the point of living in hostility, otherwise other people will benefit from the hostility,” he said.

The Prime Minister reiterated that there would be ‘no surrender, no retreat’ for him.

Before returning to his seat, Najib shook hands with the Umno leaders on the stage including with his critic, Umno deputy president Tan Sri Muhyiddin Yassin which had attracted attention of delegates and media.

Najib started his long-awaited winding-up speech by reminding the Umno members about the importance of being loyal to leaders and courtesy in voicing views and advising leaders.

Najib said the criticism must be based on two approaches, namely the Malay courtesy which was full of order and Islamic method which reminded them to investigate the information received in order to avoid defamation.

“The Malays are polite, orderly, if they want to talk bad they will do it in sarcasm.

“Our religion teaches us to trust each other and must have Islamic spirit and soul,” he said.

The prime minister said that according to Islam, any message could not be accepted with ready credibility, but needed to be researched, investigated and examined to avoid defamation, for example on the issue of 1Malaysia Development Bhd (1MDB).

The danger of being defamatory was that it could lead to killing, he said.

Najib cited the fall of the Melaka Sultanate and Ottoman Empire which were caused by hostility and internal problems.

“Umno is a political institution where the Malays seek shelter, rely on and give protection to our grandchildren and will determine the glory of the Malays.

“That’s why, if (Umno members are) indisciplined and disloyal (to leaders) Umno could face destruction,” he said.

By quoting a great scholar of the Archipelago HAMKA, Najib reminded Umno members to choose the middle path in life.