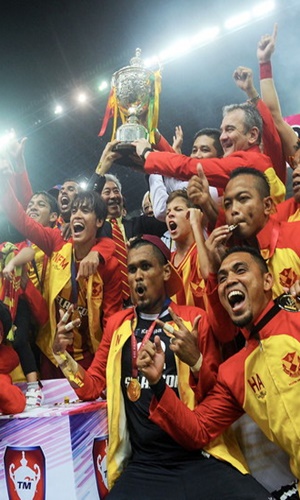 SHAH ALAM: A brace by Selangor striker Ahmad Hazwan Bakri, scoring one in each half helped the Super League runners-up to win the Malaysia Cup for the 33rd time.

The comfortable 2-0 victory over Kedah at the Shah Alam Stadium last night ended a 10-year drought for the ‘Red Giants’, as the last time they won the Malaysia Cup was in 2005 through a 3-0 thrashing of Perlis at the National Stadium in Bukit Jalil.

To sweeten the historic win, the success was the most meaningful gift for the Sultan of Selangor Sultan Sharafuddin Idris Shah, who celebrated his 70th birthday yesterday.

Ahmad Hazwan was chosen as the Man-of-the-Match.

Kedah, who have been Malaysia Cup champions four times (1990, 1993, 2007, 2008), finished their campaign in the Malaysian League this season with the Premier League Cup title.

In a match that was witnessed by over 80,000 fans tonight, both teams were eager to bag an early goal, but luck favoured Selangor when they opened the score through Ahmad Hazwan in as early as the third minute, after he took on Guilherme de Paula’s through-ball with aplomb.

Stung by the goal, Kedah stepped up their offensive play to hunt for an equaliser and almost got it, but the attempt by Albanian import Liridon Krasniqi in the 24th minute went just slightly off the right side of Selangor’s goal post.

The score remained 1-0 until the end of the first-half.

In the second half, Ahmad Hazwan scored the second goal for the ‘Red Giants’ in the 47th minute with a powerful shot into the top right corner of Kedah’s goal, to the ecstatic cheers of the 31,000 home fans at the stadium.

Kedah’s woes continued as they were forced to play with 10 men after goalkeeper Mohd Firdaus Muhamad was shown the red card by referee Muhammad Nazmi Nasaruddin in the 84th minute for handling the ball outside the penalty area when trying to prevent Selangor substitute, S. Veenod from scoring.

The scoreline remained at 2-0 until Muhammad Nazmi blew the final whistle. 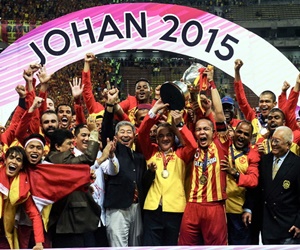