Saturday, August 15
You are at:Home»News»Sarawak»Forging a new direction for ‘Greater Azam’ 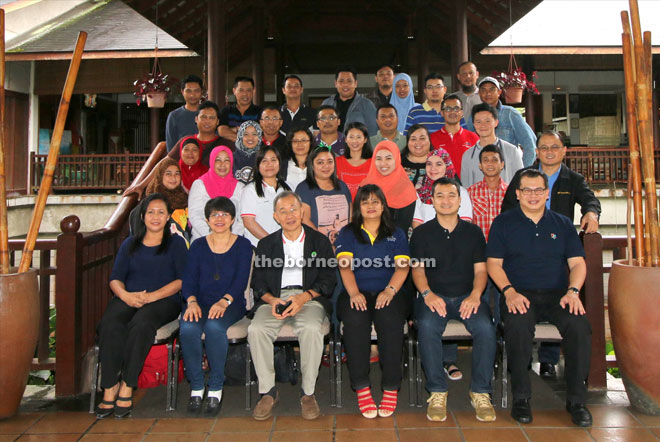 Dris (front, third left) in a photo-call with the Greater Azam management and staff as well as retreat facilitators.

KUCHING: Angkatan Zaman Mansang (Azam) Sarawak plans to create a bigger impact through greater cooperation and collaboration with its sister organisation Sarawak Development Institute (SDI) and its subsidiary, the Faradale Group of Companies.

Azam Sarawak and SDI chief executive officer Datu Aloysius Dris explained it was important for this collective group, which he coined as the ‘Greater Azam’, to find a new direction to work together more closely in order to achieve its mutual objective.

As such, he stressed on the importance of moving in the right direction and in tandem with trends not only locally, but regionally and internationally as well.

“The management and staff in the Greater Azam should focus on self-improvement and to update ourselves,” he said during a staff retreat over the weekend to strengthen cooperation and collaboration between Greater Azam organisations.

“We cannot afford to be static, because to be static means to regress and to be left behind, as the world around us is moving all the time.”

Dris pointed out that all this would require greater efforts in capacity-building from the organisations in Greater Azam.

The retreat focused on the strategic directions for the Greater Azam, as well as on building high performance teams, and on capacity building for each organisation.

It also gave an opportunity for each organisation in the Greater Azam to provide an update of their current activities and programmes.

Dris added that the retreat was a significant milestone towards strengthening the Greater Azam in achieving the shared common goals of helping to develop the state.

“Through this retreat, we hoped to find improvements for the future of Greater Azam, aligned with all our objectives,” he said.