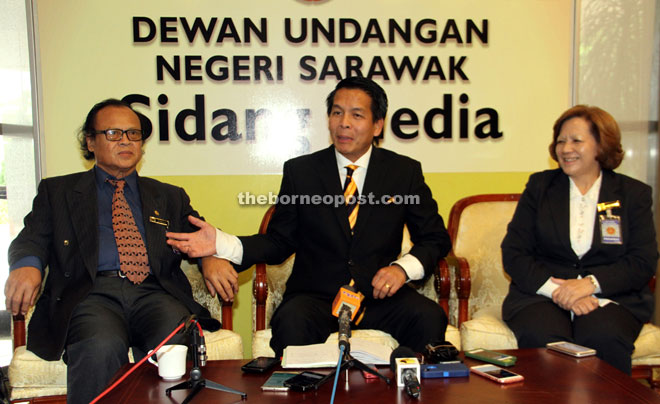 Dennis, flanked by Robert (left) and Kijan, responds to a question posed by a reporter. — Photo by Chimon Upon.

KUCHING: The Orang Ulus in Baram will once again host the ‘Highland Folk Music and Dance Festival 2016’ as an effort to help boost the state’s tourism sector.

According to Telang Usan assemblyman Dennis Ngau, the two-day event will be held in November next year.

“We held similar events in the past — the last one was in 2012 — and we are bringing it back because we aim to revive the dying performing arts of Orang Ulu sub-ethnic groups.

“As such through this festival, we hope to showcase the interesting music and dances of the various ethnic groups under this community in Baram,” he said during a press conference held on the sidelines of the State Legislative Assembly sitting on Tuesday.

Dennis also highlighted that the timing of the festival would coincide with the first anniversary of Telang Usan’s elevation into a district. Adding on, he said the hosting venue would be Long Bedian, which had just become a sub-district recently.

“We hope that the next festival would be able to attract a bigger crowd than the turnouts in previous editions — the last eventmanaged to attract 2,000 visitors including those from Peninsular Malaysia, Singapore and Brunei.

“Next year, we are expecting not less than 3,000 people coming for the festival,” he said.

Dennis added that apart from cultural performances, the event would also feature special packages inclusive of transportation, accommodation and food for those planning to come.

The assemblyman was accompanied by political secretaries to chief minister, Robert Laing Anyie and Kijan Toynbee, during the press conference.