Wednesday, October 27
You are at:Home»World»Myanmar duo sentenced to death 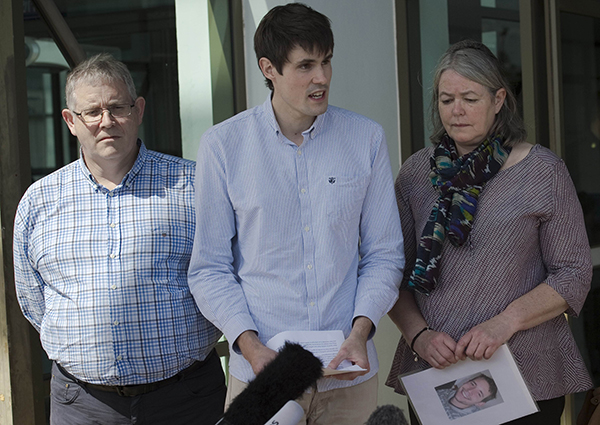 Sue Miller (right), Ian Miller (left), and Michael Miller (centre) — the respective mother, father and brother of slain British backpacker David Miller — make a brief statement to the media after the verdict in the murder trial of David Miller, at the Koh Samui Provincial Court in Koh Samui. — AFP photo

KOH SAMUI, Thailand: Two Myanmar migrants were sentenced to death yesterday for murdering a pair of British holidaymakers on a Thai island, in a case that sullied the kingdom’s reputation as a tourist haven and raised questions over its justice system.

Zaw Lin and Win Zaw Tun were found guilty of killing David Miller, 24, and the rape and murder of Hannah Witheridge, 23, whose battered bodies were found on a beach on the southern diving resort of Koh Tao in September last year.

Both defendants were “guilty of murder for which the penalty is the death sentence,” an unnamed judge reading the bench’s verdict told the court on neighbouring Koh Samui.

The pair were also found guilty of raping Witheridge in a ruling that was welcomed by Miller’s family, who travelled to Thailand for the verdict.

The judge said “DNA evidence from both suspects” guided the decision, citing forensic traces from the accused found on Witheridge’s body.

The migrant workers, who were shackled in court, were grim-faced as the verdict was delivered, while the mother of one of them wailed from the gallery.

Both men denied killing the British pair and their lawyers have pledged to appeal after a police investigation they say was riddled with flaws and inconsistencies from the outset.

The men were arrested on October 2 after a high-profile police probe which saw authorities come under intense pressure to solve a case that shocked the Thai public.

Throughout the trial prosecutors said their evidence against the men was rock solid.

But the defence has accused the police of bungling and using the migrant men — both aged 22 — as scapegoats.

Investigators were accused of failing to properly collect and preserve DNA samples and declining to test key pieces of evidence, such as Witheridge’s clothes.

Miller was struck by a single blow and left to drown in shallow surf while Witheridge was raped and then bludgeoned to death with a garden hoe.

Flanked by his parents as he spoke outside the court, Michael Miller — the brother of the slain David — said ‘justice’ had been served.

“He (David) was hacked down from behind, dragged into the sea and left to die. That will live with us forever. What happened to Hannah Witheridge is unspeakable,” he said.

“David always stood up for justice and justice is what has been delivered today,” he added, endorsing the work of the Thai police and the reliability of the forensic evidence.

Witheridge’s relatives did not return to Thailand for the verdict.

Throughout the trial the defence disputed the forensic evidence and accused the police of torturing their clients into signing confessions, which they later retracted.

Rights groups say the case reflects a wider trend of low-paid migrant workers from neighbouring countries, including Myanmar, being blamed for crimes in Thailand where the justice system is easily bent by wealth and power.

Andy Hall of the Migrant Worker Rights Network and an adviser to the defence team said court decision had failed to prove ‘beyond reasonable doubt’ that the men were guilty.

“We believe that the evidence presented at court was full of holes, was incompetently collected, and incompetently analysed,” he added.

The police probe into the horrific murder was dogged by accusations of mishandling.

In the hours after the bodies were found, officers failed to seal off the crime scene or close the island’s port.

Gruesome pictures of the victims’ bodies also quickly emerged online, piling on the misery of their distraught families.

Initially police appeared to flounder in their quest for the perpetrators with suspicion by turns falling on several other migrants, a backpacker seen drinking with the victims on the night they died, and the son of an influential village headman.

Within days of their arrest Thai police said the pair had confessed. But the men soon retracted those confessions, insisting they were made under duress, a charge the police deny.

According to the Thai Corrections Department there are 456 prisoners on death row in Thailand and the last execution was carried out in 2009.

The murders stained Thailand’s reputation as a tourist haven but did not prompt a lasting fall in visitor numbers in a sector that has remained buoyant despite the nation’s history of coups and conflict. — AFP