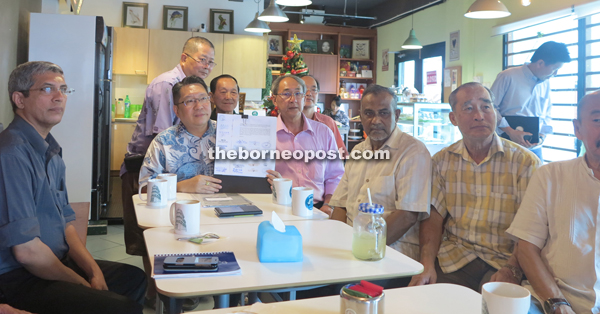 Wee (second left) with other India Street tenants and business owners holding up the letter to be submitted to DBKU.

KUCHING: The business community in India Street and the surrounding areas are irked by the delay in the India Street Cover Up project.

As such, they are urging the Kuching City North Commission (DBKU) to intervene and to talk to the contractor concerned to complete the project by the end of January.

At a press conference yesterday, Kuching India Street Merchants Association president Dato Wee Hong Seng said the association has collected signatures of the tenants in the area to be submitted to DBKU, expressing concern over the delay.

“As the beneficiaries, we leave it to DBKU to settle the matter,” Wee said.

According to him, the RM4.3 million project started in January this year and should have been completed in July, stressing that the project not only caters for the business community in India Street, but also that of the surrounding areas.

Wee pointed out that the association wanted DBKU to get the contractor to set a fixed date for the completion of the project without any further delays.

“We understand that any projects implemented in any area will result in businesses suffering losses, but the project which has been delayed has resulted in substantial losses to us.

“We have missed the Hari Raya sales, Christmas sales and back to school sales.

“Chinese New Year is coming and we don’t want to miss that if the project is further delayed,” he pointed out, adding that losses incurred by the businesses in the area dropped by about 50 per cent due to the project delay.

Wee further hoped that the contractor would not come up with excuses but complete the project, stressing that they should find ways to expedite the process.

“The contractor should not show that they are incompetent by not completing the project by January next year,” Wee asserted.