Sunday, April 18
You are at:Home»World»Gunmen attack Indian air force base 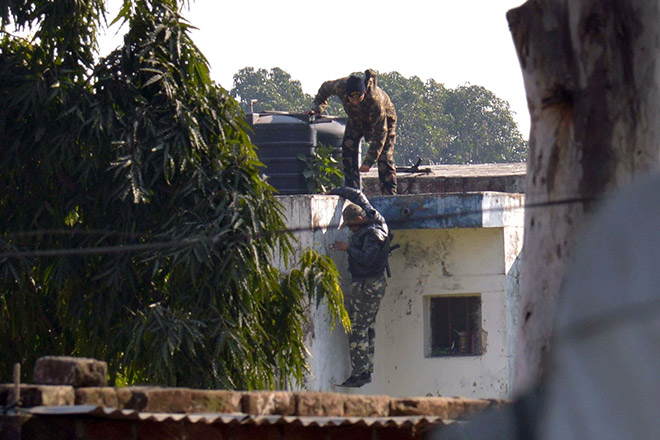 Indian security personnel position themselves on a rooftop at the airforce base in Pathankot. — AFP photo

PATHANKOT, India: Suspected Islamist gunmen staged a pre-dawn attack on a key Indian air base near the Pakistan border yesterday with two militants killed in a shootout, officials said, striking a blow to the neighbours’ fragile peace process.

At least four gunmen suspected to be from the Pakistan-based Jaish-e-Mohammed Islamist group dressed in army uniforms infiltrated Pathankot air base in northern Punjab state at around 3.30am (2200 GMT), security officials said.

Firing was still ongoing ten hours after the brazen attack – a rare targeting of an Indian military installation outside disputed Kashmir – as special commandos combed the base looking for militants still hiding out. It comes a week after Prime Minister Narendra Modi paid a surprise visit to Pakistan, the first by an Indian premier in 11 years and threatens to derail talks between the nuclear-armed rivals, who have fought three wars since independence in 1947.

“We want peace but if terrorists carry out attacks on Indian soil we will give them a befitting reply,” Home Minister Rajnath Singh said in televised remarks.

A protest broke out on the road leading to Pathankot base in the early afternoon yesterday as local residents burned effigies apparently intended to resemble Pakistani militants, an AFP journalist said.

“Our men came under fire during combing operation after gunfire had stopped for few hours. We are challenging them in one of the areas inside the base,” regional police chief Kunwar Vijay Partap Singh told AFP.

“At least two of the attackers are dead,” Singh said adding that six to seven security officers were injured, some critically.

The Pathankot air base houses dozens of fighter jets and is important for its strategic location about 50 kilometres from the Pakistan border.

Local television stations showed helicopters surveying the area, while elite National Security Guard commandos were flown in to flush out the attackers.

“We believe they are Jaish-e-Mohammed terrorists,” a top security official at the scene said, speaking on condition of anonymity. The official added that security forces had so far prevented the ‘heavily armed’ attackers from inflicting major damage at the base.

Jaish-e-Mohammed, which is banned in Pakistan, fights against Indian rule in the divided Himalayan region of Kashmir, where a separatist conflict has claimed up to 100,000 lives. While Punjab has largely been spared such violence, however, it has not been immune.

In July, three gunmen said to be Pakistan-based Lashkar-e-Taiba militants killed seven people, including four policemen, in an attack in the majority-Sikh state.

Modi’s Dec 25 visit to Lahore to meet his Pakistani counterpart Nawaz Sharif indicated a potential thaw, and the foreign secretaries of both countries are to meet in Islamabad this month.

But the Indian leader’s trip prompted critics to warn of retaliation by militants, and the Hindu nationalist leader has nevertheless promised a robust approach to Pakistan, with his Bharatiya Janata Party repeatedly stating that ‘terror and talks cannot go together.’

Sameer Patil, a security analyst at the Gateway House think-tank in Mumbai, said Saturday’s attack was likely to be a cross-border strike possibly carried out in retaliation for the visit.

“There is substantial first evidence of Jaish-e-Mohammed and Lashkar-e-Taiba militants trying to sabotage the peace process,” he told AFP.

“The long-term planning was always there but the ultimate decision to expedite it would have been taken after the visit.”

India blamed Jaish-e-Mohammed for a December 2001 attack on the Indian parliament that killed 11 people, led to a massive military build-up at the border and brought the two countries almost to the brink of war.

New Delhi later suspended all talks with Pakistan after Islamist gunmen attacked the Indian city of Mumbai in November 2008, killing 166 people. The attacks were later found to have been planned from Pakistan.

The two countries agreed to resume a peace process in 2011 but tensions have spiked in recent years, with cross-border shelling in Kashmir claiming dozens of lives since 2014.

Authorities had put Punjab on high alert Friday after five gunmen in army fatigues hijacked a car driven by a senior police officer, which was later found abandoned on a highway connecting Pathankot to the restive neighbouring region of Kashmir. It was not clear if there was any link with Saturday’s attack. — AFP