Monday, May 10
You are at:Home»Features»Sarawak riding the Cambodian wave

A CAMBODIAN-Malaysian group of companies with Sarawakian roots walked the talk at the Asean Business Community (ABC) on the second day of the Regional Grouping’s economic framework with the grand opening of their warehouse, office and the first DIY retail outlet in the Kingdom of Cambodia.

The group of companies, known collectively as the Mekong Group, consists of Mekong Advantage Group (MAG) Co Ltd and Mekong Amerjati Corporation with the former specialising in geo-technical investigation, survey, mechanical and electrical engineering and design.

Group chairman Bong Joon Fook, from Kuching, said MAG is the pioneer and most advanced geotechnical investigation specialist company in Cambodia, boasting the most advanced laboratory and testing equipment with many highly-qualified engineers, including three with doctorate degrees, and Phd holders in engineering on board.

The group also enjoys support and cooperation from the Cambodian and Malaysian governments. The latter sent its ministerial representatives to officiate at the grand opening in Phnom Penh on Jan 2.

Cambodia continues to enjoy robust growth and has a very young population where 68 per cent are below 30 years old compared to Malaysian’s ageing population.

“This means there is plenty of room for growth,” Bong noted.

All the youths of the country are second and third generations offspring of survivors of genocide perpetrated by the ruthless Khmer Rouge. About 20 per cent of the population reside in the cities, mostly in vibrant Phnom Penh, strategically located at the confluence of four rivers.

Construction cranes dotting the skyline underscore the hive of activities in the capital where a sea of motorcycles share the roads with the latest Lexus 570, Audis, Mercedes and other vehicles capable of putting Malaysian vehicle owners to shame.

Bong said MAG is well-positioned to take full advantage of the fast-growing economy which has registered over seven per cent GDP growth over the past two decades. 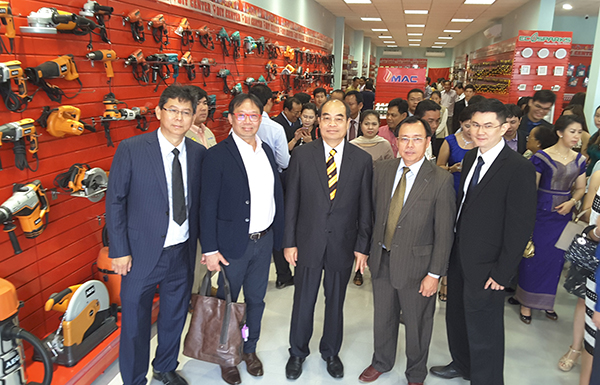 This first dedicated DIY outlet in Cambodia with a Sarawakian touch serves as the launching pad for the opening of another five in the kingdom.

Good for another decade

According to Vongsey Vissoth, Secretary of State of the Economy and Finance Ministry and vice-president of Supreme National Economic Council of the Kingdom of Cambodia, this growth trend is projected to continue for at least another decade.

He said the Cambodian government had high expectations of more business cooperation and opportunities for investors from Malaysia, particularly with the rapid urbanisation of Cambodia offering plenty of opportunities.

He singled out the Mekong Group as an example of such cooperation, saying Cambodia looked forward to the transfer of technology and technical expertise. He commended the collaboration established with the group’s board of directors’ visit to Malaysia to study and identify areas of cooperation.

The Mekong Group’s grand opening of their facilities in Phnom Penh is line with the objective of promoting free flow of goods and services, investments, capital and skilled workers.

Also present were Pit Chamnane, Secretary of State of the Education, Youth and Sports Ministry of Cambodia and Datuk Dr Stephen Rundi, Assistant Minister of Public Utilities (Electricity and Telecommunications), the board of directors of Mekong Group and overseas business partners from Malaysia and Singapore.

With high hopes for greater cooperation and collaboration, Entri said Sarawak, which has a good grid system and is in an earlier state of urbanisation, could offer expertise and technology in central sewage and sanitation hygiene and other sectors.

He said Malaysia, particularly Sarawak, looked forward to more bilateral economic cooperation with Cambodia, including sharing its experience and expertise with more tie-ups in the business community. 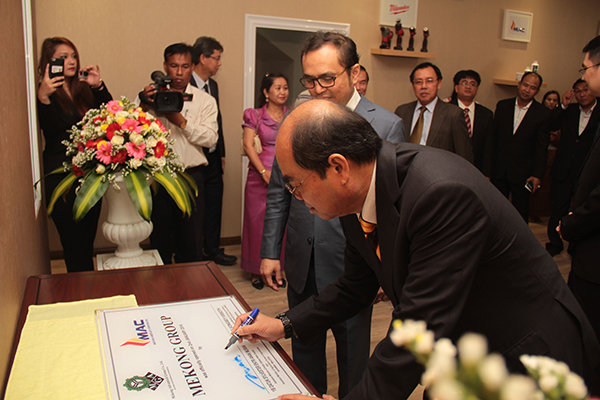 Entri signs the plaque at the joint launching of the Mekong Group with Vongsey in Phnom Penh.

Meanwhile, Bong said the group had intimate knowledge of the local environment and the government policies and plans, adding: “We also have international partners from Malaysia, Singapore and Cambodia sharing our ambition to expand our presence.”

He pointed out that the transfer of technology and expertise through the MAG Group would create more job opportunities.

Mekong Group’s international partners include top producers of energy-saving lighting systems, sewage, sanitation and other competitive sectors and they intend to bring more business partners from Malaysia on board to tap the business opportunities there.

The presence of the First Secretary of Finance and Economy, which is equivalent to the Deputy minister status, and a state cabinet minister from Malaysia at the grand opening also underscored MAG’s clout and support from the respective governments.

Mekong Amerjati specialises in trading and distribution of hardware, construction materials, lighting and other engineering products.

Bong said with Cambodia registering an average of 7 per cent GDP growth annually, the time is ripe for increasing investments in the this fast-developing country which recently invested US$ 1.5 million in upgrading its facilities and capabilities.

The first DIY hardware shop in Cambodia was opened at Kapunchea Krome in Phnom Penh, and the group has expressed confidence it is the first step in long-term plans to open at least another five outlets throughout the country over the next 12 months.

In its expansion plan, the group will also seriously look at the concrete batching, zinc roofing, aluminium extrusion and waste water treatment and sanitation business.

Bong said the group is already talking to potential business partners from Malaysia and other countries.

With confidence in its own strength, coupled with strong networking and a robust economic outlook in Cambodia for the next decade, the Mekong Group is training its eyes on vigorous expansion and contributing towards the economic growth of the country.

According to International Monetary Fund (IMF), economic growth is expected to be strong this year despite global sluggishness. Expansions in garment manufacturing, construction and domestic demand are expected to sustain growth.