Wednesday, September 28
You are at:Home»News»Sarawak»Penguang says has given out RM1.3 mln in govt grants 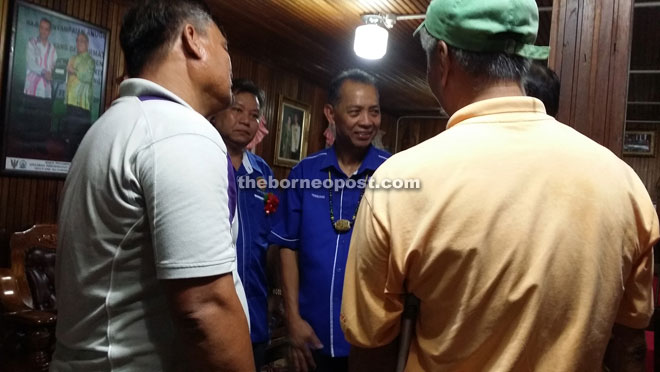 Penguang (second right) having a light moment with his supporters during the meet-the-people session in his longhouse recently.

When met by The Borneo Post at his longhouse in Block C, Sungai Entulang in Bakong recently, he said the grants were given in cheques.

At the Christmas-New Year gathering and Meet-the-People session in Sungai Entulang recently, SPDP president Datuk Seri Tiong King Sing pledged to give RM150,000 for the upgrading of car parking areas in front of Block B and Block C longhouses.

“All these allocations are from the federal government to help the people,” Penguang said.

He hoped the money would be used wisely and for the actual purpose.

On another note, Penguang said he would continue with his rounds of visit to longhouses and villages in Bakong, Tinjar, Marudi and Ulu Teru to meet the people and get to know their problems and needs.

He admitted that he was contented with the response from the people during his visits, and expressed his thanks and appreciation to them.