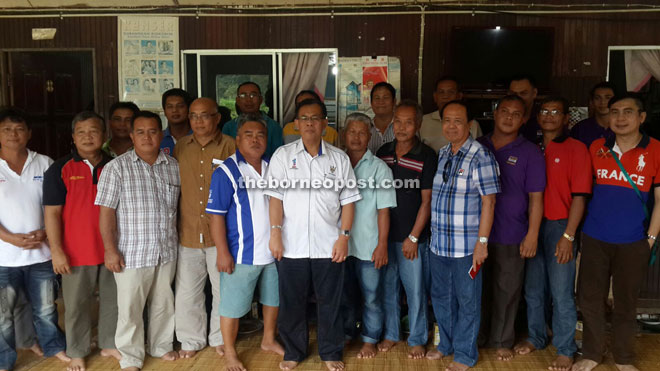 Jamit (front, sixth left) is seen with the longhouse folk. On his right is Tuai Rumah Ekau Baring.

KAPIT: Rumah Ekau Baring residents have been asked to support the Barisan Nasional (BN) candidate during the next state election.

Jefferson Jamit Unyat, a political secretary to the chief minister, said this was necessary to ensure the smooth implementation of development activities planned for the rural community.

“I’d like to make it clear that all these years since the last state election in 2011, after Pelagus was won by independent candidate YB George Lagong, the people have suffered because the past five years, being in the opposition, there’s no minor rural project allocation. The projects carried up all these years were allocated by Datuk Alexander Nanta Linggi, who is Kapit MP and Deputy Minister of Rural and Regional Development,” he said during a visit to the longhouse recently.

“In my capacity as a political secretary, I’ve travelled extensively and regularly to meet the longhouse folk and to explain government policies and development agenda. At the same time, I’ve received feedback from the grassroots. What I’ve seen and what I’ve heard, many people in the longhouses in Pelagus expressed their regret because they’ve suffered and have since pledged their support to the government. They’ve vowed to vote for the BN candidate in the upcoming election.”

He called on Rumah Ekau residents to turn up in full force to vote for the BN candidate.

Jamit was at the longhouse to explain about Bukit Goram, which was among the 11 new constituencies approved by Parliament.

Jamit explained that the two new constituencies with two new elected representatives here would help to give greater focus on development in the areas.

He also called on all members of BN component parties to unite in order to defeat the opposition.