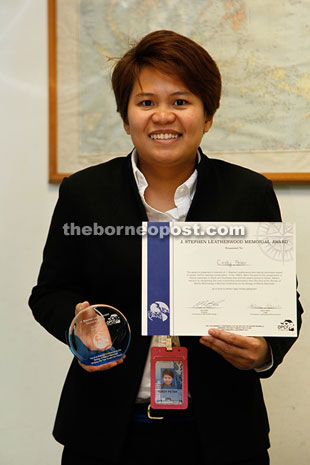 Cindy with the Stephen Leatherwood Award.

A love for whale species, especially dolphins, led the research officer from Unimas’ Biodiversity and Environmental Conservation Institute (IBEC) to win the rare award with a working paper on ‘Duplication of fishing activity and whales and dolphins species distribution in Santubong, Sarawak’.

Cindy’s working paper stood out from entries from other countries in Southeast Asia such as the Philippines, Singapore and Indonesia.

She had not expected to win as the other competitors had also presented strong working papers.

“I am grateful to have won the award and thankful to Unimas and Marine Mammalogy Association for the cooperation and support throughout my participation at the convention,” she said.

The award was an opportunity for young researchers from South and Southeast Asia to present the most outstanding papers on
the best methods to protect animals.