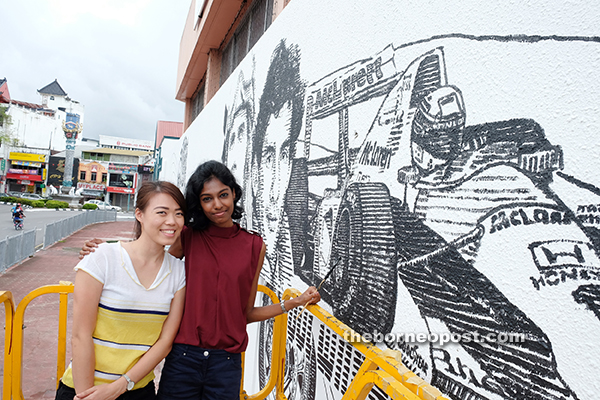 Siaw (left) and Janani have been working on the mural for the past two weeks.

KUCHING: Curious Kuchingnites will have noticed a series of interesting murals popping up on the façade of a corner shoplot at Jalan Abell here featuring popular motorsport personalities and their racing machines.

The murals are the handiwork of artist Daphne Siaw, 27, who has been working on the outdoor paintings for the past two weeks now, together with her colleague and fellow artist Janani Premchandh, 24, who hails from Chennai, India.

Commissioned by musician and motorsports enthusiast Alex Wong to decorate the outside of his upcoming cafe – which will carry a motorsports theme – Siaw has faithfully recreated the likeness of many of the sports’ famed faces, such as the late Formula One champion Ayrton Senna, MotoGP champion Valentino Rossi, motorcycle racer Giacomo Agostini and more.

“This is my first time creating something of this scale outdoors, so it’s been an extremely fun and fulfilling experience so far,” Siaw told thesundaypost when met yesterday.

“There have been several challenges, such as the weather, but overall, this project has been a blast. Plus it’s our first time operating a scissor-lift to reach the upper levels of the façade,” she beamed.

Balancing on the lift is no easy feat, as a considerable amount of precision and dexterity is required to accurately put brush to canvas, which in this case, is the large white space of the building’s exterior.

“Alex approached me through our mutual friends with an idea, which was to depict some of his favourite motorsport personalities as paintings on the outside of this new cafe, and we worked together to complete several drafts before finally settling on this final design,” Siaw said, holding up the sketch she uses as reference to create the murals. Both Siaw and Janani have worked on several projects before, such as creating murals indoors and an installation at the Waterfront Bazaar.

“Once in a while, there are passersby who are curious about what we’re doing and are supportive of our art, and that’s really encouraging,” Janani said.

“They ask us who we’re painting, some enthusiasts recognise the faces, and some enquire when the cafe is opening. We’re just having fun up here while enjoying the creative process,” she said as the scissor-lift bobbed up and down.

Siaw focuses as she painstakingly ensures that every detail does not go unnoticed, her hands dotted with black paint.

“I guess it comes down to composition, when creating something of this scale. It’s about positioning things properly, little by little and making sure that everything fits in the right place,” she says, unperturbed by the sound of passing cars and the darkening rain clouds gathering above.

The murals are about 85 per cent complete, they estimate, and should be completed in the next two or three days, depending on the weather. 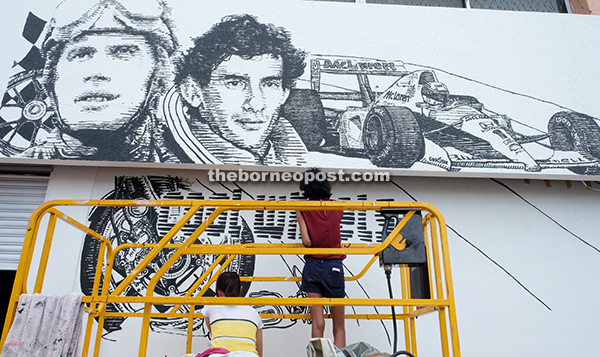 The artists rely on a scissor-lift to reach the upper levels of the building’s facade.