Thursday, April 9
You are at:Home»Features»Gems of the tourism belt 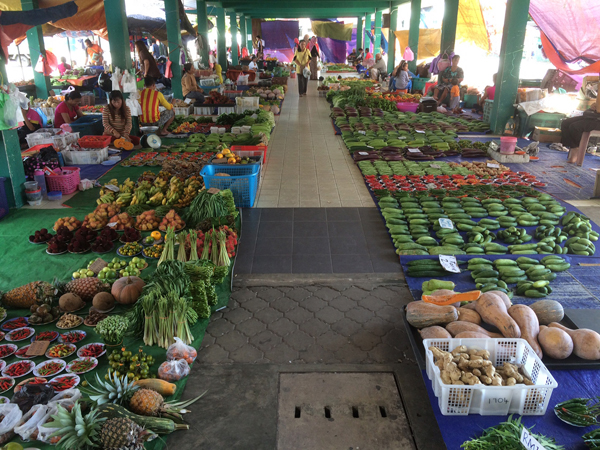 The neat and orderly Lundu Market.

UNBEKNOWNST to many, Lundu and Kuching are linked by more ways than one.

It is quite usual to travel from Kuching to Bau, and from there, turn right to continue the journey to Lundu on almost 100km of smooth tar-sealed trunk road.

This has never been an issue to road users since the Bau-Lundu Road is properly maintained and flanked by captivating verdant scenery to make the drive very pleasant. Apart from good road connectivity, Lundu, after all, is also known for its scenic landscape and idyllic ambience. Its reputation as a holiday spot is further boosted by especially its proximity to the beach-fronting Sematan area, a popular tourist destination on the southern-tip of the First Division.

From a recent interview, the well-travelled thesundaypost journalists found, to their surprise, there is actually another way from Kuching to Lundu – via the road that cuts through Sampadi (so let’s call it Sampadi Road) and links up with Samariang area in Petra Jaya. The scenery is equally mesmerising as the Bau-Lundu Road, if not more.

Travellers get to soak up the picturesque countryside dotted with rolling plantations, sprawling farms and pristine secondary forests fanning out into the horizon, arrested in its timeless clarity, by jugged features of ancient and mysterious hills and mountains. It’s awe-inspiring.

As the road is still a well kept secret, cruising along it is both pleasant and relaxing – away from the flurry and chaos of urban traffic.

The road was once a palm oil plantation road, known for its rough gravelled surface. Back then, it was less travelled unless circumstances dictated. And recently, away from the fanfare of publicity, the road was upgraded and transformed — from a bumpy, dusty and danger-fraught route into a smooth motorway.

The only difference between this road and the Bau-Lundu Road is perhaps the fact that travellers, using the former, have to cross seven rivers. There are six bridges and seven waterways. No bridge spans the last link — Batang Rambungan — the biggest of the seven rivers – linked to both banks by a couple of ferries operating rain or shine.

For those who have the luxury of travelling at a leisurely pace, using the ferry could be an interesting experience. Motorists have to skilfully drive on deck and park as orderly as possible to allow more vehicles to join the queue. After parking, the travelling party can alight and watch the ferry driver manoeuvre across the river in a matter of minutes.

However, for locals such as 69-year-old Rujus Brahim of Kampung Sampadi Slenggok, it would be a dream come true if they could dispense with the ferry service.

“We do hope our YB — Tanjung Datu state assemblyman Datuk Patinggi Tan Sri Adenan Satem who is also the Chief Minister — will build a bridge across Batang Rambungan to fix the missing link,” he told thesundaypost at Lundu Bazaar.

With a bridge, the journey from Lundu to Kuching will be shortened by at least 20 minutes to just within the hour.

“As you can see, the shophouses are mostly Chinese-owned. Not that we have anything against the Chinese but it would be good if the government could provide more business premises for Bumis,” he said, adding that right now, the Bumiputera community is lagging behind in trade and commerce as most of them are still dealing in primary goods such as jungle or sea produce.

Rujus pointed out that as a former private sector employee, life had been hard, especially without any pension.

“We hope the Adenan administration will look into the needs of struggling senior citizens like us and provide some assistance.”

Rujus and his fellow residents now feel very special and hopeful because their hometown Sampadi lies in Tanjung Datu state constituency, represented by the Chief Minister himself. His feeling is shared by many, including new Sampadi Kapitan Chen Khee Fui and resident Jee Fah Shin. 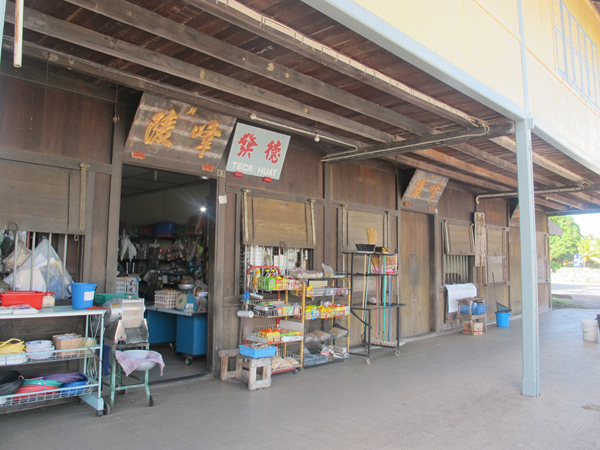 These three shoplots built more than a century ago are the most ancient in Sematan.

Generally, a trusting feeling and optimism is in the air that Tanjung Datu constituency will see greater socio-economic development — with more goodies in store for the locals.

“We are very happy with the development here but we know there will be more to come.

“Adenan has shown he is a different kind of leader — kind, fair and friendly. If he can bring about major development and changes across the state, he definitely can bring more development here,” Chen said.

He is particularly happy to note that Lundu District will be turned into an education hub so that the younger generation in the area will not be compelled to leave town for the sake of higher education.

He noted that the site, which has been identified, is now undergoing “ground preparation” due to its low-lying terrain. Although satisfied with the general development in Lundu and its vicinity, the Sampadi kapitan has one small wish (shared by Rujus) which he hopes Adenan can help to fulfil.

As mentioned earlier, there are six bridges across seven rivers along the new Sampadi Road. All are Bailey bridges with a strong, solid metal base except for the one spanning Sungai Limau which

is wood-based. Chee and Rujus have expressed the fervent wish this bridge could be upgraded to a metal bridge.

Meanwhile, Jee who described Adenan as “banyak bagus”, said the opposition had no place in Tanjung Datu constituency.

“All this while, the Chinese community in Sampadi are BN supporters. We are rural Chinese, not urban Chinese and, the Chinese from the rural areas still support BN. There is no opposition presence here. Even if they were to come, they would be turned away because they are not wanted here,” Jee stressed.

As secretary of Sampadi Tai Pak Kung Temple Association, Jee looks forward alacritously to the day the temple is connected to the grid.

“Electricity had been brought to Kampung Sampadi Cina near Kampung Sampadi years ago. But four Bumiputera families and the temple still do not have electricity. We don’t quite understand the reason for this.

“Our temple, which is about 100 years old, still relies on generators for lighting. We have tried many times talking to the authorities but until now, I honestly still don’t understand why the temple and the four Bumiputera houses are not connected to the grid,” a puzzled Jee lamented.

He hoped for the coming Chinese New Year, things would change for the worshippers who thronged the temple, as well as the four affected Bumiputera families.

“Adenan is a leader who is very concerned about the welfare and basic needs of the people.

This is our small wish and we do hope he will look into it for us,” Jee added. 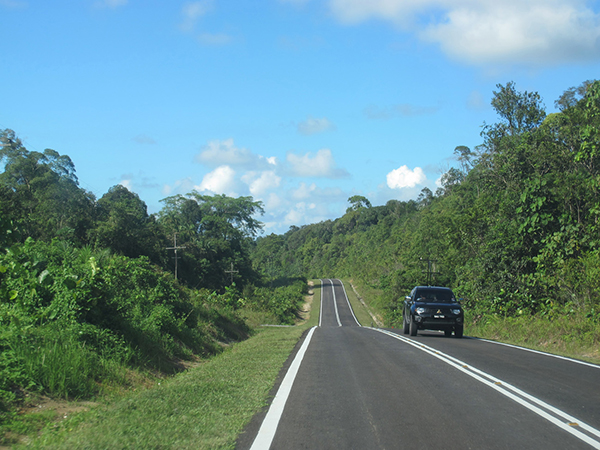 The new Sampadi Road which is unknown to many.

While the residents look at micro infrastructural needs of the area, the leaders are focusing on the development in totality, centred on tourism, of course.

Dato Sri Dr Wan Junaidi Tuanku Jaafar, the MP for Santubong (comprising the state constituencies of Tanjung Datu, Pantai Damai and Demak Laut) and also Natural Resources and Environment Minister, has revealed a masterplan to develop Lundu into a new satellite town is now in the pipeline and will be unveiled soon by the Chief Minister.

“It will be consistent with the State government’s plan to turn the whole coastal area —from Muara Tebas to Tanjung Datu — into a tourism belt,” he told thesundaypost.

A few consortiums have been engaged to come up with proposals and the best one will be picked by the state government for implementation under the 11th Malaysia Plan, starting this year.

“It will be private sector-driven but the government will do the necessary planning and provide the infrastructure needed. As it will be a mainly private sector initiative, we do not want them to ask too many things from us. They will have to come up with the money,” Wan Junaidi said.

Pressed for the specific location of the proposed new township, he was tight-lipped apart from  letting on that it would “not be far” from Lundu town.

He pointed out that it was not appropriate to even talk about the masterplan now as the Chief Minister had yet to be briefed.

“But since you media are asking what’s the big plan for Lundu and Sematan, I have to oblige so that the people will know we are actually doing something for Lundu. Once the people know the government is doing something, it will be easier to convince them to participate in the whole process of development there,” he explained.

On Tanjung Datu constituency, of which Adenan is the assemblyman, Wan Junaidi said the Lundu-Sematan areas within it would be opened up for major development based on eco-tourism.

He pointed out that the Pan-Borneo Highway which had been approved and implemented by the federal government, stretches from Tanjung Datu on the southern tip of Sematan right up to Sabah in the north of Borneo Island.

“The mammoth project will open up more land which will benefit the local people. On top of that, tourists will soon be able to visit Tanjung Datu National Park as well as the Simunsam Wildlife Sanctuary by road. Right now, these two tourist attractions can only be reached by boat.

“Now that the project has started, it’s also easier to attract businessmen to build more chalets, hotels and resorts in Sematan and Lundu which have beautiful beaches for picnic, fishing and snorkelling. The whole area should be well patronised with its natural attractions such as the turtle sanctuary on Talang-Talang Island and dolphin sighting excursions in the surrounding seas,” he said.

The area is also famous for Rafflesia on Mount Gading which is drawing increasing numbers  of visitors annually.

“In short, both Sematan, Lundu and for that matter, the whole coastal area from Tanjung Datu to Muara Tebas, will one day become an important tourism belt and as such, its full potential must be fully tapped,” Wan Junaidi added.

The even better news that might have Sematan shopkeeper Au Chen Kiong leaping with joy is the government’s nod to the waterfront projects for both Lundu and Sematan and the embankment projects for Santubong and Buntal.

Au who operates the shop set up by his father in the 1950’s, said tourists thronged Sematan every weekend and during festive seasons for sightseeing, fishing, diving and a host of other alfresco activities.

Au who grew up in Sematan and whose shop faces the South China Sea, is used to the fresh air and beautiful scenery, saying Sematan is “a nice place” where he has chosen to stay in his golden years. And who wouldn’t?

Sematan with its long stretch of beach, resort chalets and bungalows, and Lundu, with its lush green vegetation, clean town centre, friendly people, pristine jungles, agricultural produce and good roads set against a backdrop of mysterious mountains, will provide the dual foundation for the much vaunted coastal tourism belt.

Before that happens, spend a weekend at these two tourist destinations, and to make it more memorable, drive up via the Sampadi Road.

When you reach Lundu, remember to pop in at the kopitiam that sells the best coffee at old shop row. Chances are you will not only get to enjoy a good cuppa but may also meet Rujus there in his dark glasses munching roti canai. 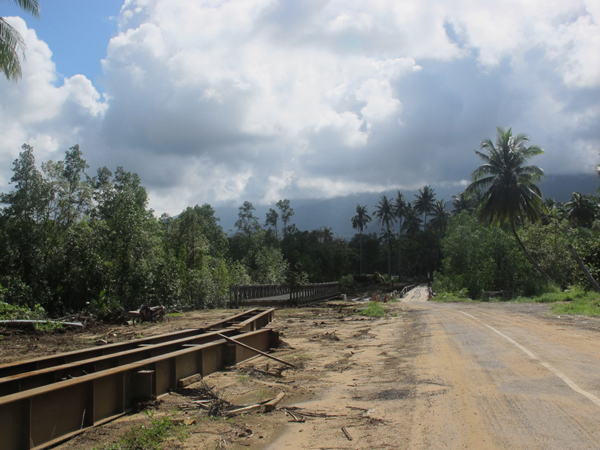 Works on the Pan-Borneo have started with the construction of the bridge not far from Sematan Bazaar.