Saturday, July 11
You are at:Home»News»Sarawak»Youths urged to use iCube Innovation to start business 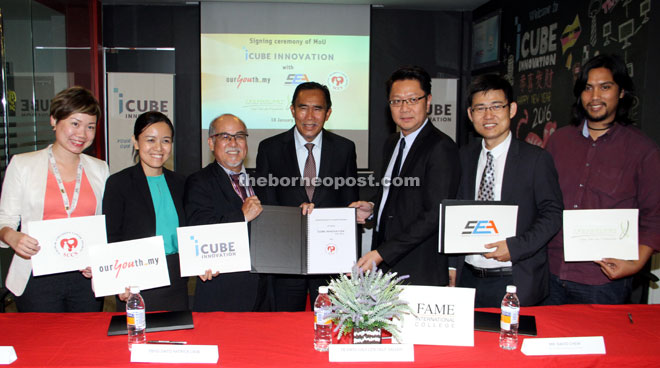 KUCHING: Graduates from institutions of higher learning should take advantage of the services provided by iCube Innovation Sdn Bhd to kick start their business with minimal cost.

Being the largest business incubation centre in Borneo, iCube Innovation is currently the leading platform for young and budding entrepreneurs to enhance their business network domestically and internationally.

“I am sure a lot of young people coming out of institutions of higher learning have ideas on what they can sell and produce. The only thing that is holding them back is the lack of avenue,” Assistant Minister in Chief Minister’s Office(Promotion of Technical Education) Datu Len Talif Salleh said at a press conference after witnessing the signing of a memorandum of understanding (MOU) between iCube and four local industries.

With the setup of iCube Innovation in August last year, budding entrepreneurs finally have an avenue to develop their interests and ideas into something productive.

Len noted that Sarawak was producing around 40,000 SPM leavers and close to 20,000 graduates every year.

“Everyone is born with talents that can be exploited and nurtured if given the space and opportunities,” he said.

Len, who is also Assistant Minister of Environment, said the government would provide assistance to iCube Innovation to expand its business network among the government and private sectors.

He revealed that some of the 51 small and medium enterprises (SMEs) or individual entrepreneurs operating at iCube Innovation had acquired contracts and offers from various industry sectors.

“In the past five or six months, we have also received overseas interests from businesses in Singapore and the Phillippines.”

He revealed that a business hub in the Phillipines had shown keen interests to bring in their entrepreneurship programme to Sarawak through iCube Innovation.

“This is a very positive sign for the state and young entrepreneurs.”