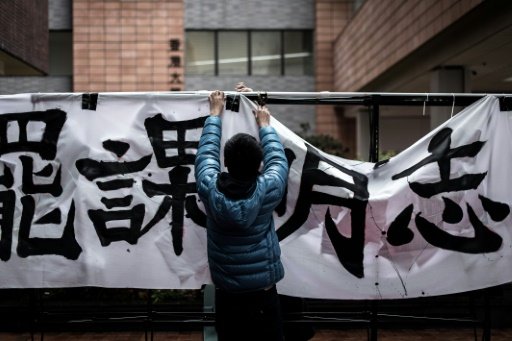 A student sets up a banner during a rally at Hong Kong University on January 20, 2015 protesting against the appointment of Arthur Li, known to be close with the government, as chairman of the university’s governing council last month. – AFP Photo

HONG KONG: Students protested on the campus of Hong Kong’s leading university Wednesday after a pro-Beijing official was appointed to a senior role, as fears grow of increasing political interference in education.

Around 100 protesters left classrooms to rally at the Hong Kong University campus following the appointment of Arthur Li, known to be close with the government, as chairman of the university’s governing council last month.

The appointment taps into wider concerns that academic freedoms in the semi-autonomous Chinese city are under threat, particularly in the wake of student-led mass pro-democracy rallies in late 2014.

“We are conducting a class boycott in order to target unfairness in the system. Students have raised opposition to the appointment but the school’s autonomy is threatened,” student leader Yvonne Leung told protesters through loudspeakers.

Li, a member of Hong Kong’s Executive Council, the top advisory body to the government, started his three-year term on January 1. He is close to the city’s unpopular leader Leung Chun-ying, who is also the chancellor of all the city’s universities.

His appointment came after the university council rejected the nomination of liberal law scholar Johannes Chan as pro-vice chancellor at the university, sparking protests from staff, students and members of the public.

Protesters vow to boycott classes for a week.

Former British colony Hong Kong was handed back to China in 1997 under a deal that guaranteed the retention of its civil liberties and capitalist system for 50 years. But there are fears those freedoms are being eroded.

In 2012 tens of thousands marched against plans for “national education”, a government proposal to introduce Beijing-centric patriotic teaching in schools. The plan was later dropped. -AFP