Sunday, June 7
You are at:Home»News»Sarawak»STB inks deal with airline for direct flight Ik Pahon (left) and Burke pose during the signing ceremony. 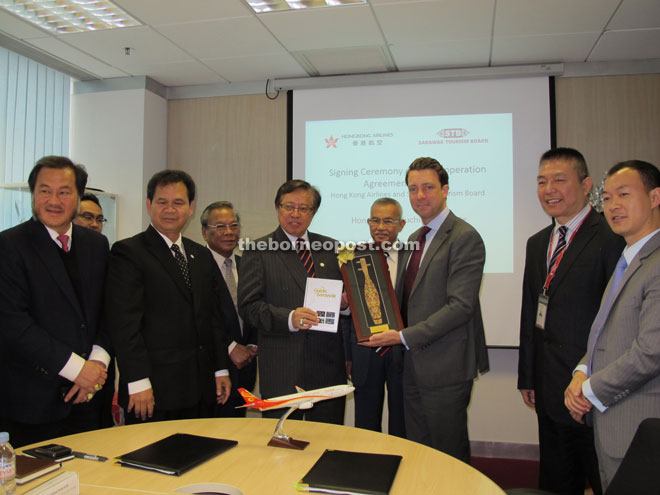 HONG KONG: The inaugural direct flight from Hong Kong to Kuching is expected to be launched on April 26.

This follows the signing of an agreement between Sarawak Tourism Board (STB) and Hong Kong Airlines for the airline to operate the Hongkong-Kuching direct route.

Minister of Tourism Datuk Amar Abang Johari Tun Abang Openg, who witnessed the signing ceremony, said Kuching
will be a new market for the airline.

He pointed out that the new route would enhance business networking between Hong Kong and Kuching apart from promoting tourism.

“Eco-tourism is our major attraction. What is important about this direct route is the potential of development. Hong Kong is the hub of East Asia while Kuching which is in Borneo that has Sarawak, Sabah and Kalimantan is a new market for you.”

Abang Johari said the airline could also tap into the MICE (meetings, incentives, conventions and exhibitions) industry while informing the airline that Sarawak would be hosting the International Congress and Convention Asia 2016 in November.

He added that his ministry looked forward to further collaboration with Hong Kong Airlines in the near future.

Meanwhile, Burke described the ceremony as a ‘positive occasion’ for the airline as he was pleased that the agreement was finally inked after rounds of deliberations since 2013.

Though there will be only two flights a week from Hong Kong to Kuching and vice versa, he said the airline aimed at building up the services first.

“Sarawak has potential for not just tourism but also industrial. We have been to the city and we know what the city has to offer. It is a good mix for business and leisure demand.”

He assured that Hong Kong Airlines would be able to connect passengers from many different markets to Kuching beginning late April.

Met by reporters, Burke thanked the support and co-operation of all parties involved in the deal and expressed confidence that Hong Kong Airlines would build the services overtime.

“Kuching will prove to be a popular destination. We will fly our passengers on board A220 with eight business class seats and 144 economic class seats.”

He added that the airline would increase the capacity during peak period by flying aircraft that offer 24 business class seats and 259 economic class seats.

Burke believed that Kuching would be a fast-growing market in the region with a lot to offer – both tourism products and business opportunities.

“This is why we will be serving the route with business class. We will be able to draw customers across the network and across the world to Kuching and to connect the people into Kuching.”

Asked how many hours the journey would take, he said it would be about four hours.

However, he could not provide further details, reasoning that the airline was still waiting for the green light on flight details from the Hong Kong government.

“We will confirm all of those details shortly. There will be no problem from the official side but we still need to wait for the final approval.”