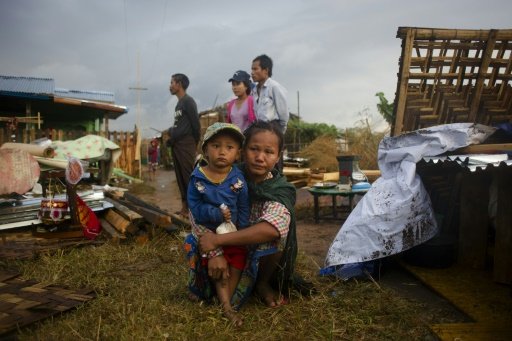 AFP | Residents look on as authorities demolish a slum area on the outskirts of Yangon on January 26, 2016

YANGON: Hundreds of Myanmar families were left destitute Tuesday after government workers used mechanical diggers to flatten swathes of Yangon slum housing as the bitter competition for land intensifies in the fast-industrialising city.

Settling competing claims for land ownership — particularly with the still powerful military — is likely to be a major challenge for the new government led by Aung San Suu Kyi’s party, which takes its seats in parliament next week following a landslide November election victory.

Residents shouted and wept as they scrabbled to save meagre possessions from their homes as diggers crushed through the bamboo, corrugated iron and concrete structures next to a military-owned beer factory at an industrial zone on the northern fringes of Yangon.

“The police force started to destroy the houses this morning. Everything is wet and my two children are so cold in the rain,” said 29-year-old farmer Kyi Kyi Win.

The mother of two, who said she had lived in the area for 19 years, told AFP that authorities had given residents just one day’s notice to take down their homes voluntarily before sending in scores of police and construction workers on Tuesday.

Yangon authorities, the city’s police force and the president’s office all declined to comment on the eviction.

Myanmar’s largest city is at the centre of huge changes that have swept through the long-isolated country under a quasi-civilian government that replaced junta rule in 2011, attracting surging investment in response to political and economic reforms.

Cranes spike the skyline as construction booms, while once sleepy streets are tightly packed with newly-imported cars. Mobile phones, once the privilege of a tiny elite, are now ubiquitous.

But the changes have also sparked a scramble for land, causing challenges across the country, where the state legally owns all land and the army stands accused of rampant land-grabbing.

Rents have rocketed in recent years, inflation is on the march and the influx of people lured into the city by a growing factory belt has put a severe strain on housing.

Thet Thet Khine, an MP for Suu Kyi’s National League for Democracy who will take her seat next week, told AFP that evictions were commonplace and a major challenge.

“It will take a lot of time to solve fairly,” she said. -AFP