Wednesday, August 17
You are at:Home»News»Sabah»Scientists attend seminar on bio-process engineering 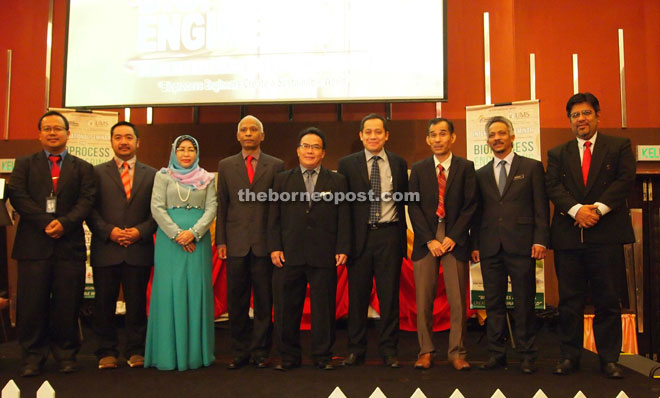 Joisin with other invited guest at the international seminar on bio-process engineering, yesterday.

Minister of Science, Technology and Innovation (MOSTI), Datuk Seri Panglima Madius Tangau, pointed out how the academia plays a very important role in assisting the government to attain the objectives of the Biotechnology policy.

“Conferences such as this are wholly endorsed by the government as it is the ideal platform to showcase the synergistic bond between the industry and the academic world through exchange of knowledge, ideas and commercial opportunities providing a win-win situation,” he said in his speech delivered by the ministry’s political secretary, Joisin Romut.

As such, he added, the government highly encourages the industry through various means, including ample allocations and fundings.

Further stressing the government’s commitment in helping the industry grow, Madius said that the government’s recognition on the high potential biotechnology sector has led to the formulation of a new policy that underlined comprehensive measures for the sector’s consistent growth.

“The policy which came into effect in 2005 has now entered its third phase of implementation focusing on positioning of Malaysia companies as global biotechnology players as well as developing biotechnology as a leading edge business.

“The third phase of the national biotechnology policy (NBP) aims mainly at the consolidation of the strengths and capabilities in the technology development of expertise and strength in drug discovery and development; creating at least 20 global Malaysian biotechnology companies in Phase NBP to spearhead the value creation process and growth of the industry; and promotion of the BioNexus Malaysia brand to position Malaysia as a global hub, by leveraging on the consolidated strengths, capabilities and expertise.”

He added that the biotechnology sector has received significant statutory financial support following the government’s acknowledgment of the sector as a new economic growth engine as it is projected to generate income in the region of USD72 billion by the year 2020.

“Three sub-sectors in biotechnology, namely, bio-fuels, bio-catalyst and fine and specialty chemicals sector have been identified as the focus industry that will help leverage Malaysia’s position in the highly competitive global market position,” he said.

With the ample supply of palm oil and other feedstock biomass, added Madius, the development of the bio-fuel sector in Malaysia is expected to be rapid due to the multiple benefits to its developers. Logistic costs are also reduced by the strength of the commodity’s supply chain in the country.

Malaysia’s first commercial-scale biodiesel plant using palm oil commenced operations in August 2006. From August to December of that year, a total of 55,000 tonnes of biodiesel was produced, which grew to 130,000 tonnes in 2007. By the end of 2007, 92 biodiesel projects had been approved, with an estimated annual combined production capacity of 10.4 million tonnes (11.7 billion litres) per year.

Malaysia’s bio-fuel market has a number of ‘vertically integrated’ producers that has advantage since it control assets across the bio-fuels production value chain including plantations, mills and refineries.

According to Madius, the second focus industry, bio-catalyst, is an emerging sector in Malaysia, which, with quite a small number of companies, especially those established ones, provides an opportunity for new companies seeking to capture a share of the local market cake.

Malaysia plays a significant role in the region’s supply chain for bio-catalysts, he said, whereby in 2008 alone, Malaysia exported around 633 tonnes of repackaged enzymes throughout the region.

“Technical and food enzymes are the most rapid growing segments of the bio-catalyst market requiring industry players to continuously innovate to remain competitive; hence significant efforts must be devoted in the R&D and in the acquisition of new technology via merger or acquisition and in-licensing activity,” he said.

In Malaysia, biotechnology is applied in the production of a range of fine and specialty chemicals with the two most significant markets in the country being the nutraceuticals and oleochemicals.

“Biotechnology has the potential to shift the balance of power in the market by modifying production process to make them more cost efficient.

“Having established sector experience in oleochemical, manufacturing can be leveraged on applying biotechnology to production processes and finally the Halal certification which will support biotechnology enterprises seeking to develop and manufacture biotechnology products destined for predominantly Muslim populated countries,” added Madius.