Sunday, June 7
You are at:Home»News»Sarawak»‘Bau set to be part of Western Tourism Belt’ 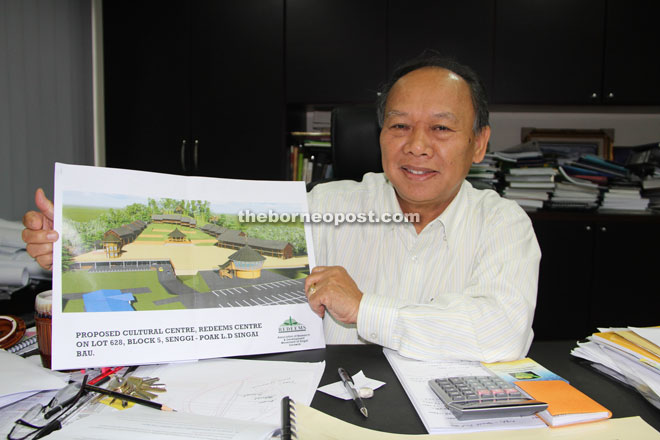 Nansian showing the plan of the RM11-million Bidayuh Cultural Centre which will be launched soon at Redeems Centre, located at Kpg Apar, Singai, Bau.

He said the masterplan of the project was designed by renowned Malaysian consultant Dr Mah Chen Ying who has been helping China in planning and designing many of its renowned tourism products.

“On my own initiative, I have done the Western Sarawak Study for Tourism Development that can be done in western Sarawak from Kuching to Sematan and particularly in Bau District.

“This is to tap the rich Culture, Adventure and Nature (CAN) tourism potential in Bau to include tourism products such as the Bidayuh cultural centre, the Chinese cultural village, the gold mining museum, the caves, the lake and the mountains of Bau,” Nansian told The Borneo Post at his office here yesterday.

He added that the Western Sarawak Tourism Development Plan could be part of the overall Southern Sarawak Corridor as proposed by the Regional Corridor of Development Agency (Recoda) to bring forth strategic development to the southern and western parts of the state.

Nansian believed that the masterplan would further boost Bau to become a major tourism centre as it has been known for its historical sites, lake, caves, rivers and mountains.

“Among the things that will be included in the Bau tourism masterplan will be a Chinese cultural village, forest and health resort, Bidayuh cultural village at Redeems Centre and many more,” Nansian explained.

On another issue, the Tasik Biru assemblyman revealed that the Bau industrial estate had been approved and would be launched soon to cater for the growing need for small-medium enterprises (SMEs) in the district.

“With the approval of 50 acres of land for this purpose, we are confident the development of SMEs in the district would boost the local economy and would provide job opportunities for the local people especially in food processing, fabrication works, vehicle maintenance and many more,” he elaborated.

Nansian also revealed that the Bidayuh cultural village costing some RM11 million would be built at Redeems Centre at Kpg Apar, Singai and would be completed within the next one or two years.

“I am a grassroots leader and my niche is on community development. Whatever we plan is for the benefit of the people and not for my own gain,” he said.

Meanwhile, Nansian who is also Teras deputy president expressed confidence that the Bidayuh community could deliver all the eight seats allocated to it for BN in the upcoming state election.

“I am optimistic that the Bidayuh community will deliver all the eight seats to BN to show that we support Chief Minister Datuk Patinggi Tan Sri Adenan Satem’s policy to develop the rural areas.

“As a rural and semi-urban community, the chief minister’s policy of being rural-biased will ensure that the Bidayuh community who mostly live on fringes of major towns can further benefit from the policy of urbanisation and industrialisation taking place in the state,” added Nansian.

Before joining politics 20 years ago, Nansian was Bintulu Development Authority (BDA) assistant general manager. He is a trained teacher, a former lecturer and an accountant by training and his experience especially in BDA has helped him in planning and implementing projects worth millions of ringgit for his constituency in the past two decades – like roads, electricity, water supply and community development.