Sunday, June 20
You are at:Home»News»Sarawak»HIV cases up 3-fold in Sarawak 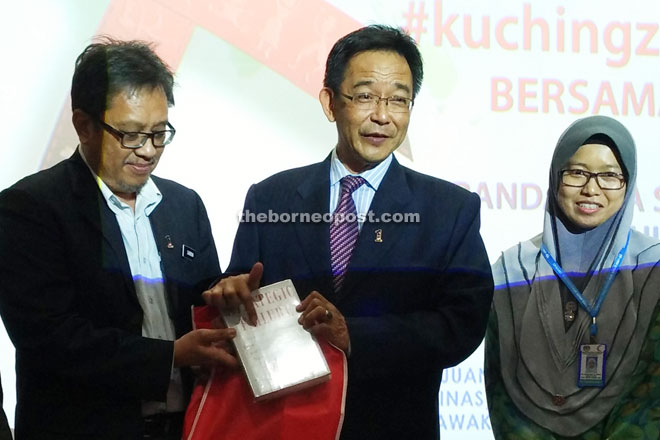 KUCHING: Incidences of Human Immunodeficiency Virus (HIV) infection jumped three-fold over the past 10 years in Sarawak.

Quoting statistics, Youth Development (Urban) Assistant Minister Datuk Abdul Karim Rahman Hamzah revealed that the number of cases increased from 3.3 per 100,000 people in 2003 to nine in 2013.

“In addition, reports also showed that the main cause of HIV infections in Sarawak was due to unprotected sex, which is different from states in Semenanjung Malaysia,” he said.

“And 74 per cent of the identified cases were aged between 30 and 49, which is during the most productive years of human beings that should be focused on developing self, career and family as well as contributing to society and nation,” he added.

Although the figure may seem small, he warned that this issue should not be taken lightly because the data did not include unreported cases.

Abdul Karim highlighted this at the #kuchingzeroHIV with the Media talk organised in conjunction with Kuching Healthy City Project – Towards Zero HIV by Year 2020 at the Auditorium of Malaysia National Film Development Board (Finas) Sarawak Branch along Jalan Sultan Tengah here yesterday.

Jointly organised by the Information Department and Health Department, the project was part of Asean countries’ initiative under the Asean Work Plan IV for HIV from 2012 to 2015 in which Malaysia has made a commitment to achieve ‘Asean Cities Getting To Zero’ Project.

The project is now at its second phase, with the action plan preparation and implementation of projects started from last year.

Abdul Karim pointed out there was a high possibility of many cases undetected due to societal stigma and discrimination that caused people with HIV afraid to come forward to seek medical attention in both public and private hospitals.

“Stigma and discrimination, in which people respond with fear and denial towards people living with HIV or even other infectious diseases, exert a direct negative impact on the patients, making them feel rejected and excluded from the society,” he said.

“Therefore, public education and campaign are important to break this barrier constructed by the society based on perception and ignorance. People need to have clearer and better understanding on what are HIV and AIDS, preventions and interventions,” he added.

However, Abdul Karim emphasised that a well thought-out plan and strategy must be laid out to approach this issue in order to reduce the harm on people living with HIV and desensitise the issue.

“We need to relook at how to approach this problem with the community so that society does not respond with fear just by hearing the word HIV or AIDS and that it will not create a negative image of the country that could drive people away,” he explained.

Abdul Karim pointed out that early education on sex and HIV/AIDS is crucial so that young people will not do things that will destroy their future especially during their rebellious years.

“This also includes smoking, alcohol, drugs and many other social ills in which young people are easily caught up and exposed to the risk of being infected by HIV,” he said.

“So, we must not be afraid to take the campaign to schools so our children can know its consequences as early as possible,” he said.

Achieving a zero target by 2020 may seem impossible. However, Abdul Karim said it is important to set a benchmark to provide direction and support for the change process.

Meanwhile, senior assistant director of HIV/STI Section of the Health Department Dr Ruziana Mis gave a talk on HIV: Prevention and Control in the first session while exco of Sarawak AIDS Concern Society (SACS) Dr Yuwana Podin talked about the Role of SACS in Battle Against HIV/AIDS.