Saturday, January 23
You are at:Home»News»Sarawak»Clean, cheap energy an advantage that will draw investors — CM 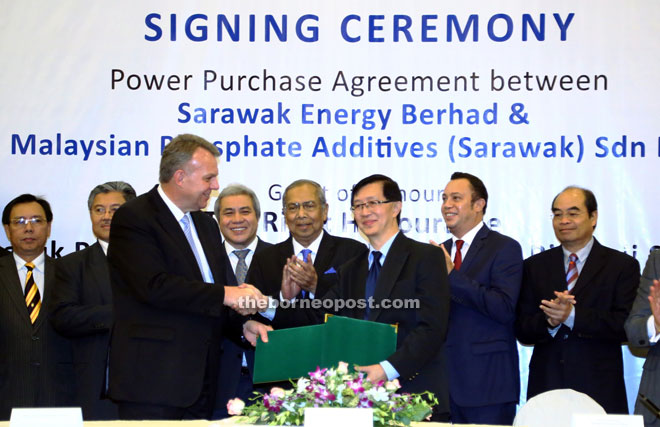 KUCHING: Sarawak, with its large-scale hydropower plants, has a strong advantage in promoting clean and cheap source of energy to attract investments from industries worldwide.

Although many have opposed to the building of dams in the state’s pursuit of renewable energy, Chief Minister Datuk Patinggi Tan Sri Adenan Satem said the government had made all the calculations and hydropower remained the best alternative for clean and cheap energy.

He added that hydropower has been proven as a sustainable engine of growth as demonstrated in developed nations such as Norway, Canada, New Zealand and Australia and other countries.

As the state aimed to become a high income economy by 2030 through the implementation of long term, comprehensive industrialisation programme in Samalaju, the ability to offer cheap and clean energy will give the state a relative advantage to attract global industries.

“Industrialisation requires a power source and Sarawak has the ability to promote cheap and clean energy that global industries are craving for.

“I believe that Sarawak is the best investment destination and we have to prove this. There are many markets that we can tap into,” Adenan said when officiating at the power purchase agreement (PPA) signing ceremony between Sarawak Energy Bhd (SEB) and Malaysian Phosphate Additives (Sarawak) Sdn Bhd (MPAS) at Hilton Hotel here yesterday.

The agreement, formalised through SEB’s wholly-owned subsidiary Syarikat Sesco Bhd, is for the supply of 150MW of power to MPAS integrated phosphate complex, the first of its kind in South East Asia.

This monumental development worth RM1.9 billion will become the latest addition to Samalaju Industrial Park in Bintulu, a further recognition of the state as an ideal destination for investors given its ability to provide renewable, secure and affordable energy as well as business friendly policies.

Content with the PPA, Adenan hoped the state would continue to attract more foreign investors.

“The main driver of investment will come from the private sector. They are better in business than the public sector. MPAS for instance is generating about RM1.9 billion in investment through its first integrated phosphate complex. The plant, scheduled to be operational in 2018, is expected to generate some 1,200 direct employment and provide bigger impact through its various downstream industries,” he continued.

Meanwhile in his speech, Sjotveit said the completion of this project would see Samalaju Industrial Park becoming the largest chemicals-phosphate hub in the country. The giant project, with a plant production capacity of 500,000 tonnes of phosphorus a year and power demand of 150mw, is more than the entire output of Batang Ai Hydroelectric Plant.

“A ready supply of affordable electricity is essential to keep the state attractive and competitive to foreign and local investors for industrial development made available by SCORE (Sarawak Corridor of Renewable Energy). SCORE is attracting more companies and industries to Sarawak, bringing financial investments and creating job opportunities with substantial spill-over benefits for the state’s economy and local community,” he added.

With the full commissioning of the Murum Hydroelectric Plant last June, the new hydropower station will increase the state’s ratio of clean, renewable and sustainable energy mix.

Sjotveit disclosed that 70 per cent of the state’s current energy mix is renewable, affordable and abundant hydropower, progressing towards a balanced generation mix of 60 per cent hydro, 20 per cent coal and 20 per cent gas to avoid over-reliance on a single source.