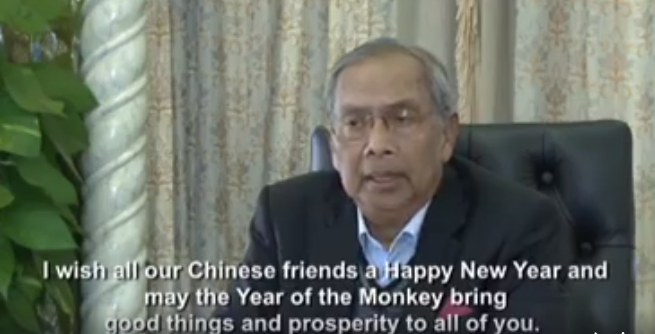 A screenshot of the Chinese New Year video message from Adenan.

In it, Adenan can be seen cheerfully beating on drums and watching lion dance performances at past Chinese New Year functions while urging Sarawakians to continue the age-old tradition of visiting one another during festivities.

“Ushering in the Lunar New Year is a time of joy and celebration according to the Chinese tradition,” the Chief Minister can be heard saying in the video.

“It has been entrenched as part of our cultural diversity here in Sarawak, much like other traditional festivals and religious celebrations.”

Adenan also made reference to his longstanding message of unity, expounding on the fact that Chinese Sarawakians of today could not be called “pendatang”, or immigrants, any longer.

“Your forefathers may have been called immigrants, but you Sarawakian Chinese of today, who are a few generations after your forefathers, cannot be called ‘pendatang’ anymore as I have pointed out from time to time,” he said.

“Sarawak is your home; you are born and bred here like any other Sarawakian.”