Monday, August 2
You are at:Home»News»Sabah»Court orders 19 of 30 in Lahad Datu intrusion case to enter defence 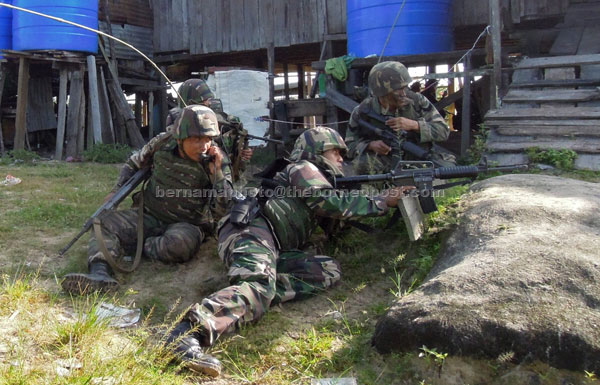 A file photo depicting army combatants during the Lahad Datu intrusion in March, 2013.

KOTA KINABALU: The High Court here today ordered 19 of the 30 individuals accused of various offences in connection with the Lahad Datu armed intrusion three years ago to enter their defence.

Justice Stephen Chung made the ruling after finding that the prosecution had succeeded in establishing a prima facie case against 19 of the accused, comprising 16 Filipinos, including a woman, and three local men.

The court fixed three weeks, from Feb 22, for trial.

Nine of the 16 Filipinos ordered to enter their defence are alleged to have waged war against the Yang di-Pertuan Agong, an offence which carries the death penalty.

They, together with six other accused, also face life imprisonment and fine, if found guilty on another charge of being members of a terrorist group.

The other six accused of being members of a terrorist group are Lin Mad Salleh, Holland Kalbi, Habil Suhaili, Timhar Hadir, Aiman Radie and a local man, Abd Hadi Mawan.

The sole Filipina in the case, Norhaida Ibnahi, was ordered to enter her defence for allegedly willfully harbouring individuals she knew to be members of a terrorist group.

The offence is punishable with 20 years to life imprisonment and fine, or both, if found guilty.

Chung acquitted and discharged two other local men and a Filipino of waging war and being members of a terrorists group, but ordered them to enter their defence after they pleaded not guilty to a new charge.

The Filipino, Basil Samiul, and one of the local men, Mohamad Ali Ahmad, are charged with soliciting or giving support to a terrorist group.

The new charge against the two men was made after Chung found that the prosecution had shown evidence that they had solicited or given support to a terrorist group, an offence punishable with life imprisonment or fine.

Chung also amended the charge against local Pabblo Alie to soliciting a terrorist group by providing aid, an offence punishable with up to 30 years imprisonment and fine.

He pleaded not guilty and the judge ordered him to enter his defence.

All the offences were allegedly committed between Feb 12 and April 10, 2013 in Lahad Datu, Beluran and Semporna.

Tight security was mounted at the Sabah Prison Department, where the High Court sat.

The area was guarded by prison guards and police personnel wearing combat uniforms as early as 6am, with the road leading to the prison complex blocked by police as far as 20m on both sides. – Bernama