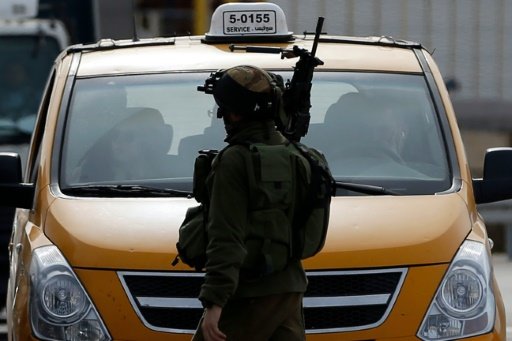 AFP | An Israeli soldier checks the vehicles of Palestinians on their way out of the West Bank village of Ein Sinya, northern Ramallah on February 1, 2016

JERUSALEM: Israel said Thursday it has charged a policeman with sending details of a Jewish woman who was riding in a car with Palestinian men to extremists opposed to interracial relationships.

The justice ministry filed charges Wednesday against border police officer Matan Amichai, who in December 2014 stopped a car in a routine check near the Palestinian neighbourhood of Silwan in Israeli-annexed east Jerusalem.

“In the vehicle were two Silwan residents and two young Jewish women,” the ministry said in a statement.

“The accused, who was on duty there at the time, took the identity card of one of the young women and photographed it with his mobile phone.”

The statement said Amichai sent the image to the head of Lehava, an extremist rightwing Israeli group, and to former parliament member Michael Ben-Ari, a follower of late anti-Arab rabbi Meir Kahane.

In a message accompanying the picture, sent to Lehava’s Benzi Gopstein, he said the two women went on a trip with the men to the Red Sea resort of Eilat.

“Here is the ID of one of the girls, please do something,” the statement quoted him as writing.

“I wanted to cry,” he allegedly wrote to Ben-Ari.

Amichai was charged with invasion of privacy and abuse of his authority. No trial date was set.

In August 2014 Lehava activists staged a rally where racist slogans, including “Death to Arabs!”, were shouted at the wedding near Tel Aviv of a Muslim man and Jewish woman. -AFP