Sunday, July 12
You are at:Home»Columns»From the Sidelines»OO…HA is traditionally an Iban call to celebration 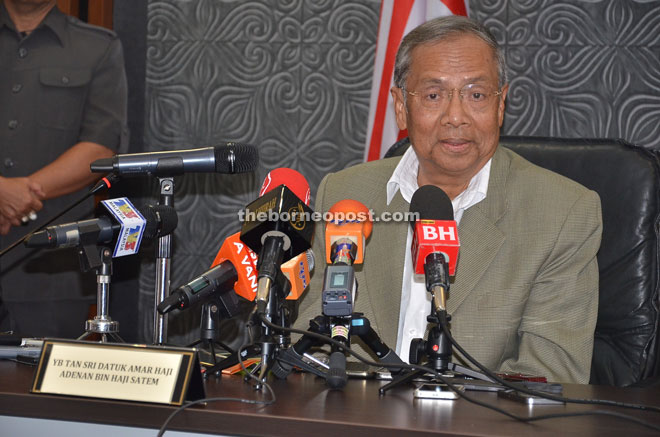 IT has now become Chief Minister Datuk Patinggi Tan Sri Adenan Satem’s salutatory signature — an unpretentious way of saying ‘hello’ and also an expression that he uses to motivate the crowd.

Then there is the colloquial Malay expression of emphasising a point between friends of ‘You…You’, which he has brought up every now and then in his speeches.

What usually follow ‘You…You’ are his own chuckles or chortles. Though no one really know what he means by ‘You…You’, one can detect, through this expression, a cheerful — and cheeky — mood in him. Most times, the audience will simply reciprocate with more laughter, because he sounds endearingly funny.

It is, indeed, enjoyable listening to Adenan. One can never expect what comes next because there may just be some surprises — self-deprecating jokes or a light-hearted witty barb at prominent politicians. There may also be slips of tongue like the recent announcement on nomination and polling dates, though such occasions are quite rare.

He sometimes appears sharp and shrewd; other times down-to-earth and frank. Temperamental at times, but Adenan is a good public speaker. Most times, his speeches are short.

He never stick to any text of speech prepared for him but would choose to pick up only the points he likes and string them together with his own message.

‘I don’t like to read other people’s speech’ is his usual explanation.

That’s Adenan — originality. No one would imagine a Malay like him would ‘Oo … ha’ like an Iban. No one could imagine the 40 initiatives up his sleeves before he announced them one by one. And some of his initiatives — recognition of United Entrance Certificate (UEC) and the Chinese joining the civil service — are truly something beyond the expectation of the Chinese community.

An educated Chinese elder whom I once met could not stop shaking his head when we talked about Adenan. He just could not believe what Adenan has done.

“I just don’t know what to say. What he has done is beyond words. It is just unbelievable,” the old-timer said. It was apparent that he needed time to let what Adenan had done sink in.

In 2014, when he was asked on Chinese support, Adenan was doubtful. He was realistic enough to know what he had done back then would not bring the Chinese back into Barisan Nasional (BN) fold.

In 2015, he was still doubtful. I remember in one of the interviews, he plainly stated that his popularity ‘could not carry all the BN representatives’.

Come 2016, Adenan has yet to be approached with the question if he is confident of having Chinese support. A check on the ground, however, might reveal positives signs of the Chinese returning to BN. First of all, there are already speculations that state DAP seats might be slashed by half in the upcoming state election.

The state DAP holds 11 of them, while Pujut is held by Fong Pau Teck who has left DAP.

Talks on the streets now are that DAP will lose Batu Kawah in Kuching; Repok in Sarikei; Dudong and Pelawan in Sibu and Piasau, as well as Pujut in Miri. These are not without basis.

It is reported when state DAP launched its Ubah machine in Sibu last week, an unexpected low turnout of fewer than 300 people was registered. Though DAP denied that this was because of the decline in its popularity, and that the low attendance was due to people busy preparing for Chinese New Year, questions did arise if it was due to the Adenan’s effect.

Political popularity is not a zero-sum game. The pendulum keeps swinging, and how it swings remains to be seen on polling day. Whether Adenan’s popularity will translate into votes is yet to be determined by the outcome of the upcoming election.

After all, the popularity of Adenan, who is also the state BN chairman, is only one factor influencing the voting pattern for the Chinese. However, one thing is certain — Adenan has earned the respect of the Chinese community and it could herald the start of their return to BN.

Previous ArticleNew ‘pasar tani’ for Samarahan
Next Article Any logic behind the hike on levy rate?