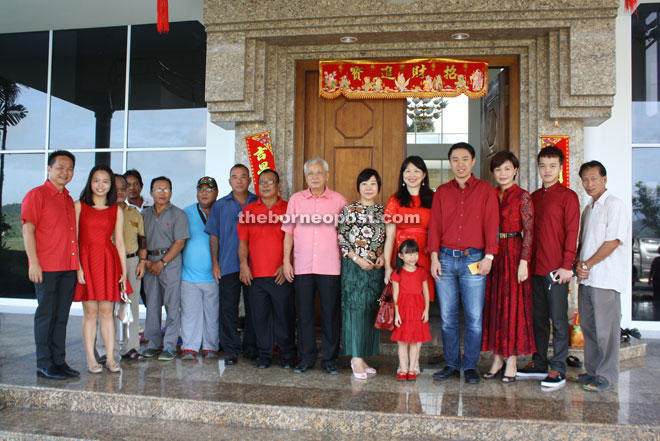 Larry (fourth right) with well-wishers at his open house.

The open house from 9am to 1pm saw a steady crowd of people coming to wish him ‘Happy New Year’.

He handed out study incentives of RM500 each to 56 students from Pelagus and Bukit Goram studying in various institutions of higher learning.

To date, some 900 students had benefited from the Larry Sng Education Fund which had already given out RM1 million to the deserving students, disclosed Larry.

The president of Sarawak Workers Party (SWP) recently announced that he would contest in the newly created state constituency of Bukit Goram in the coming state election.

Larry served two terms as assemblyman for Pelagus from 2001 to 2011. He first stood on the PBDS ticket and then PRS under the presidency of Land Development Minister Tan Sri Datuk Amar Dr James Masing.

Larry held the post of deputy secretary general in PRS before he was sacked from the party.

Larry resigned from the post in 2013 to assume the position of president of SWP.

In the last general election, he contested in Lubok Antu but lost.

On his open house, Larry hoped it would enable the people to put aside their political differences and work together as one community.

“For the first time, we’ll be voting in the new state constituency of Bukit Goram. We should take this election very seriously and support the person most suitable to be your representative.

“Make your choice wisely because in this time of economic downturn we must have an elected representative who can speak out for the people. I feel that under such circumstances, it’s always better to give our support to someone who we know well and someone we can trust and of course someone who has a good track record in the community.

“I hope that during this coming election, the town and semi-urban voters in Bukit Goram will think as one to vote for our future,” he advised.

During an interview with The Borneo Post later, Larry spoke of his vision for Kapit.

“Education has always been my core activity since I first joined politics in 2001. That’s why I’ve the Larry Sng Education Fund. Just look at how education can actually benefit people.

“I think the fastest way that we can give people a headstart is to give them easy access to higher education. That’s the best way forward for people in Kapit as we’re considered a semi-rural constituency,” explained Larry.