Monday, February 6
You are at:Home»News»Sabah»Elderly couple start receiving help
For the freshest news, join The Borneo Post's Telegram Channel and The Borneo Post on Newswav. 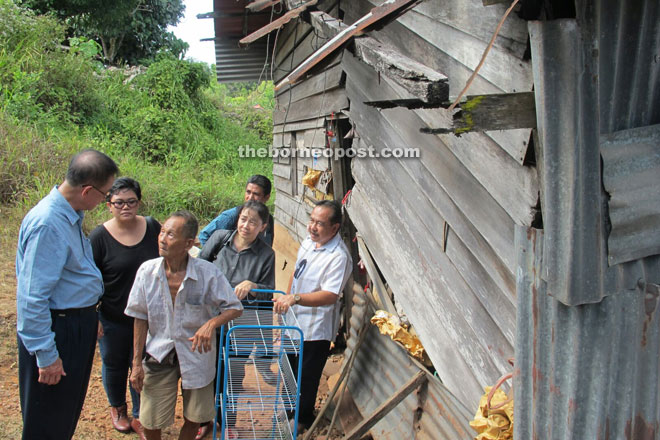 KOTA KINABALU: Help has started pouring in for an elderly couple who are staying at a dilapidated structure in Kampung Gudon, Sepanggar.

Photos of Liew Yun Pin and Kong Nyuk Hiong, and their rotten wooden and zinc house, have gone viral after a long-time friend, Tong Chung Hing, posted them on his Facebook a couple of days ago.

Apart from several non-governmental organisations, the Sabah Journalists Association (SJA) led by its president, Francis Fahir and Board of Trustee member Kassim Sangi, raised funds and donated rations, as well as necessity items, for the husband and wife.

“This is part of our efforts to show our concern to the needy. We hope that through such effort, we would be able to lighten their burden, besides encouraging others to also come forward to help those in need,” said Fahir.

Earning barely RM20 per week from selling galangal and ginger at the Foh Sang and Gaya Street tamu ground, Liew, 83, also has to care for his 71-year-old wife who suffers from heart ailment.

“We have been married for more than 50 years, and childless. So she’s my responsibility. She’s my only family,” said Liew when met yesterday, adding his only surviving brother is also unwell after a stroke few years back.

He added that life was hard, especially when it rains, as his condition does not allow him to fix the holes on their ceiling.

“We have no money to install floorings, so we sleep on the ground. And since our door is so fragile, sometimes people would break into the house and steal our food supplies, or anything that fancy them,” said Liew.

He added that for many years, his wife had also depended on traditional Chinese medicine because it was considered the best remedy.