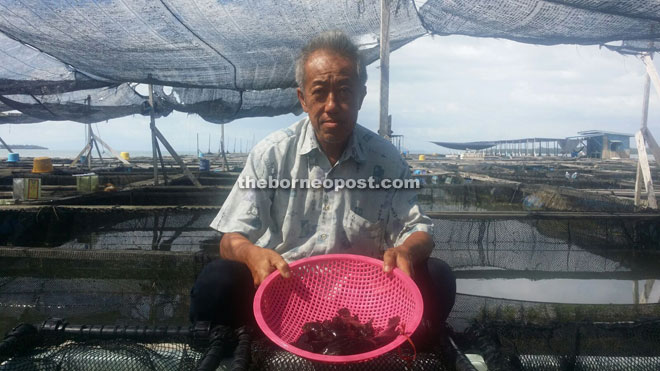 Khoo showing some of the fish at an aquaculture farm.

KOTA KINABALU: Aquaculture operators have urged the government to provide clear directives as to whether the ban on the export of fresh seafood is applicable to the industry.

Koperasi Pengusaha Akuakultur dan Perikanan Sabah Berhad chairman Khoo Mum Huah said there was no clear directive as to whether the ban on fresh and live seafood export would be imposed on aquaculture farms.

Khoo said many bumiputeras had become involved in the aquaculture business on a small scale, and thus a suspension on fresh seafood export, even a temporary one, would deliver a fatal blow to them.

“The big players have invested up to tens of millions of ringgit to their aquaculture farms.

“The bumiputeras might have invested their tens of thousands of ringgit (to aquaculture farms), but that is already all their savings.”

He pointed out that live fish could sell up to RM50 per kilogramme (kg), while fish that has gone through blast freezing could only sell for RM15 to RM20 per kg.

“Our costing is between RM25 to RM30 (per kg), depending on which grouper.

“The whole aquaculture industry will be finished if fresh seafood has to undergo blasting, which slashes the selling price from RM50 to RM20 per kg,” he said when contacted yesterday.

Sabah Fisheries Marketing Authority chairman Datuk Dr Jaujan Sambakong has also said the suspension on the export was only for a temporary period under certain circumstance such as during the monsoon season or the current El Nino.

Khoo, who is also a councillor in Kunak, added that blast freezing seafood also incurred additional costs for the facility, logistics and labour, which could amount to more than RM30 per kg of fish.

“How can the (aquaculture) industry sustain?”

Khoo said Sabah was considered one of the top players in terms of aquaculture technology in the country.

Over the years, he said aquaculture operators had been assisting bumiputeras to develop and grow their aquaculture farms through the transfer of technology, supplying quality fish fry and species and educating them on the conditions necessary for the fish to survive.

“Once they know the nature of the aquaculture business, they will encourage their surrounding villagers to do the same.”

He said several hundreds of households from Tawau to Lahad Datu depended on the aquaculture industry for their livelihood, including bumiputeras who operated small-scale aquaculture farms by the seaside.

“This is a source of income for the bumiputeras, for them to contribute to the country and reduce their dependency on the government. To earn their own income with labour.”

He said there used to be a lot of fish bombings from Semporna to Kunak in the past that had caused much environmental damage, especially to the corals.

Since the bumiputeras have been engaged in aquaculture, Khoo said the fish bombing had ceased because such activity would cause the fish fry to die.

“The sea has become their livelihood and the villagers willingly protect the natural resources.

“The environment has started to recover since the villagers started their aquaculture business,” he said.

Therefore, Khoo hoped that the government could provide a clear directive on the ban of fresh seafood export and an assurance for the aquaculture industry.

Khoo, who is also MCA Silam Division vice chairman, believed that the suspension on the export of fresh seafood stemmed from the complaints of restaurateurs.

“Restaurants are saying that there is not enough fish to sell because business is too good.”

However, Khoo argued that the reason was that restaurants wanted top quality seafood from suppliers at a low price.

On top of that, he said restaurants requested payments to be made on credit basis, which could be deferred for months.

“They (restaurants) say they are unable to buy good seafood. If they raise the price they offer, fishing boat operators will give you every single quality fish they have.”

He said restaurateurs wanted to maximize their profit but failed to consider the interest of the suppliers, such as aquaculture and fishing boat operators.