Tuesday, January 28
You are at:Home»News»Sarawak»Pollution in Sungai Koyan blamed for melioidosis cases 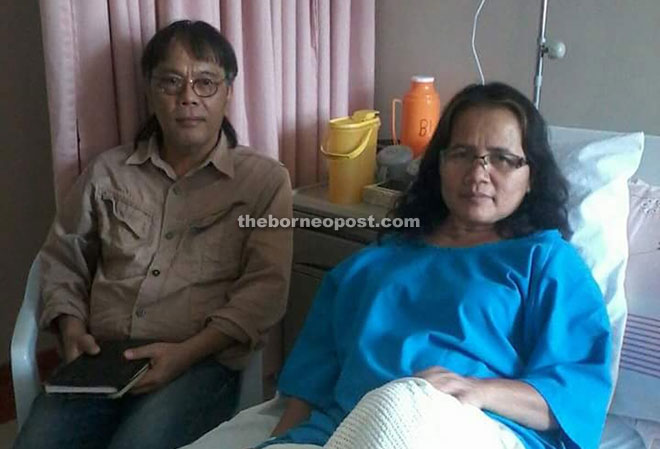 Elli is seen with Idah, who is undergoing treatment in Kuching.

KUCHING: Pollution in Sungai Koyan has been blamed for allegedly infecting Baram Resettlement Scheme (BRS) residents with melioidosis, which is caused by the Burkholderia pseudomallei bacterium.

The disease is said to have claimed the life of Epe Let from Uma Juman in Sungai Asap last week, just two months after her son David Wan is said to have also died from the same disease.

On Wednesday, Sungai Asap villager Idah Surat was warded at a private hospital here and is said to be undergoing treatment for melioidosis, leptospirosis and typhoid.

“Over the past decade, I have lost four family members to this disease. Among them are my aunt (Epe) and David,” claimed Bakun Community Safety Committee chairman Dr Elli Luhat yesterday.

According to Elli, the Ministry of Health needs to gauge the seriousness of the disease in the resettlement area with a proper tabulation of the number and topography of victims infected.

Currently, BRS is home to around 20,000 residents who rely on Sungai Koyan for their daily water supply.

Elli claimed if melioidosis is not contained in Sungai Asap, it could spread to the Batang Rajang where more lives could be threatened.

He said the Bakun Community Safety Committee will provide its support and assistance to relevant agencies to contain the spread of the disease.

“The villagers here have sacrificed their land to build the Bakun and Murum dams. It is only fair that all of them deserve to be given water which is safe for consumption and daily use without any lingering fear,” he said.

Elli added that each of the 14 longhouses in Uma Juman are linked with water pipes connected to a pumping station at Sungai Koyan.

“However, the water is treated from a mechanical system which does not remove the hundreds or

thousands of dangerous bacteria and minerals in it. A biological system should be put into place as a measure to immediately stop victims from making contact or consuming these dangerous bacteria,” he claimed.

He also called on Sarawak Hydro and Sarawak Energy Berhad to conduct corporate social responsibility programmes to educate the people on the dangers of melioidosis.

Susil said the meleoidosis cases at the Bakun resettlement is not an outbreak as claimed by Elli.

Meleoidosis in Sarawak he explained is actually categorised as an endemic disease with confirmed reports of sporadic cases.

“We cannot call it an outbreak because it involves only one or two cases and based that it is an endemic,” he added.

Touching on the case in Sungai Asap, the area he said is experiencing new development projects and land cultivation projects.

“As construction gets underway, the organism which carries the diseases are bound to resurface from the soil,” he added.

A press statement from the Health Department state director Datu Zulkifli Jantan however stated that to date, Sarawak had recorded only one confirmed case of the meleoidosis disease affecting a victim in Sungai Asap, Bakun in 2016.

Only two confirmed cases of the disease were reported in Sept and Oct, 2015 which involved one death.

The statement also said there had not been any unusual rise in the number of cases being recorded in Sungai Asap or any other parts of the state.