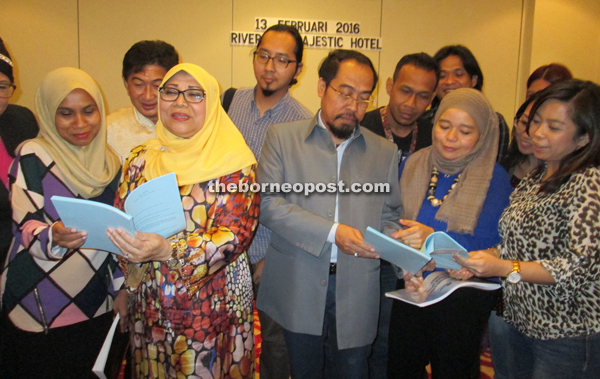 Rohani (second left) looking at a copy of the Children’s Act (Amendment) 2015 with members of the media yesterday.

KUCHING: Marrying a rape victim can never cover up the fact that a crime has been committed.

According to Women Development, Family and Community Minister Datuk Seri Rohani Abdul Karim, rape is still a crime, regardless of the circumstances it is in.

She said although the perpetrator and the victim might get married legally, investigation into the case would still be carried out by the police.

“Under the native customary law in Sabah and Sarawak, the rapist may be able to marry the underage victim, but the crime will not be erased. He will still face charges for (statutory) rape,” she said in elaborating on such a case during a media briefing on Child Act (Amendment) 2015 yesterday.

“It’s like a thief returning a stolen item to the victim, to cancel out the theft. It does not work that way. You cannot run away from the fact that a crime has been committed.”

Rohani said it could be that the rapist approached the parents of his victim to arrange a marriage so that the police report against him could be withdrawn and thus, he would avoid being prosecuted in court later.

“But even if the police report is withdrawn, only the prosecution officer can decide whether the (statutory rape) case should be withdrawn or not,” she said.