Sunday, June 20
You are at:Home»News»Sarawak»Relocate for comfortable living 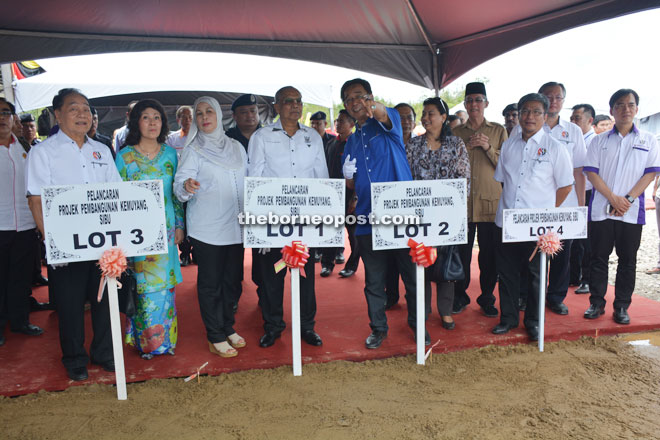 “They (villagers) should not think that the new housing area in Kemuyang which is more conducive for living is far,” he said.

Adenan was speaking at the launching of Kemuyang development project. The event was organised by the state Ministry of Housing and Land Custody and Development Authority (LCDA).

Adenan recalled that when Rampangi in Kuching was opened up up some 20 years ago, people were reluctant to move there but now it has become a popular dwelling place. The same thing happened when Tudan in Miri was opened, he noted. All these, he explained, happened because villagers were used to staying close to their siblings.

“So, you must open up and move out to where it is more conducive for bigger families. This is our (government) planning for housing for the future,” Adenan added.

In 2013, a raging fire levelled 44 houses in Kampung Datu/Hilir, leaving 144 families homeless. A total of 441 lots had been allocated for the first phase of the project, spanning an area of 149 acres.

On another subject, Adenan said within a short span of two years, he had implemented 50 decisions, one of which was for Dayaks not to be called ‘others’ (‘dan lain-lain’) in federal government forms because they were also Malaysians and sang the same national anthem as their peninsula counterparts.

Another decision that he made was for Chinese especially the second and third generations not to be called ‘Pendatang’ (immigrants).

On religion, he said Sarawak practised freedom of worship and Sarawakians were free to use the word ‘Allah’.

“No objection from me. To each their own. Even though I am the number one most powerful man in the state, I will not tell you how to worship your god. That is your business.

“I am not god…don’t try to pretend you are god like certain people in peninsula pretending to be god.” He added that Sarawakians had no religious conflict all this while.

“That is why I don’t want those from peninsula or overseas to come here to poison people’s minds. I will not allow religious fanatics and religious bigots to come to Sarawak and this includes Umno, DAP, PAS, PKR and so on.”

He also said he did not want any West Malaysian

party to open up their branches here. “We know Sarawak better than any other people because we are Sarawakians.”

Other decisions he made included abolishment of tolls and reduction of electricity tariff and ferry charges.

On devolution of power, he noted that in the last 55 years many of Sarawak’s powers had been taken by KL. “I want those powers back to Sarawak.”

He revealed that phase one of the negotiations was successful, which involved administrative empowerment under the 13-Point Agreement.

On the second phase of the negotiations pertaining to federal laws that affected the state’s rights, he said it was still going on. But on the third phase which touched on oil royalty, he revealed that the negotiation had been put on hold for the time being due to the drop in fuel price. However, he assured that he would continue to pursue the matter once the price of fuel picked up.

As for the RM16-billion Pan Borneo highway project from Lundu to Lawas spanning about 1,000 km, he described it as one of the largest projects in Sarawak.

“I told the Prime Minister we do not want to be left behind when they have North and South highways, we have Pan Borneo Highway.”

Meanwhile, a symbolic handing over of TOL (temporary occupation licences), land titles for the traditional village of Kampung Nangka and land titles under Section 6 and 8 of the Land Code was held during the same function 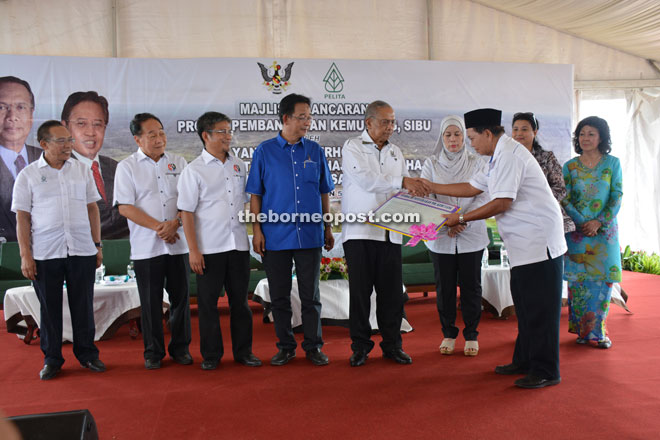 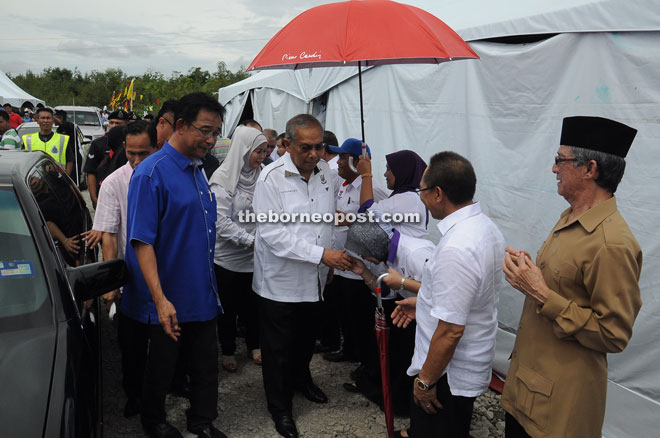 Adenan being welcomed upon arrival at the launching of Kemuyang development project, while Abdul Karim (left) looks on.