Thursday, June 4
You are at:Home»News»Sarawak»‘Tree of Life’ brings world art to Kuching 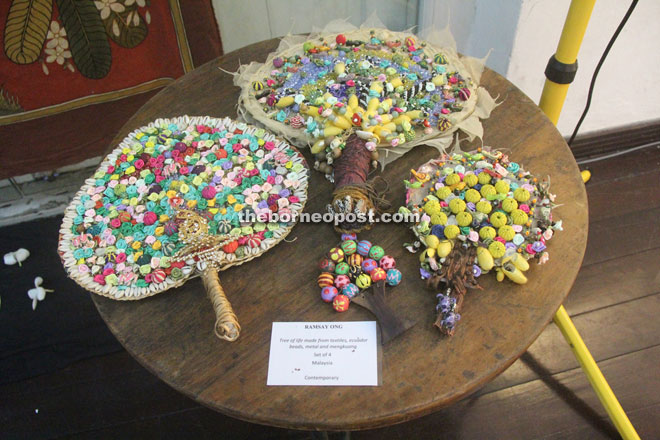 A contemporary interpretation of Trees of Life made from various textiles, ecuador beads, metal and mengkuang by Ramsay Ong.

The art on display in Kuching represents about one third of the approximately 300 pieces of artwork and textiles contained in full exhibition due to space limitations, SAS founder and president Edric Ong said when met recently.

Ong, a distinguished Malaysian textile designer whose creations have graced fashion catwalks around the world, is also senior vice president of the WCCAP and vice-president for WCC-South East Asia.

Ong and a team of volunteers worked around the clock over two days to install artwork by artists and craftspeople from approximately 30 different countries including India, China, USA, Britain, Japan, Taiwan, Iran, Sri Lanka, Bangladesh, Vietnam, Indonesia and Cambodia.

The idea for the exhibition was inspired by a joint Malaysia-India exhibition premised on the tree of life motif which Ong and co-curator Nirula collaborated on about 12 years ago.

“[But] in this exhibition, we have representation from five continents around the world, with traditional and contemporary works not only in textiles, but also in ceramics, metal, leather, and mixed media.

“It is a very interesting mix of expressions. The traditional pieces give you a sense of history and heritage but most of the works here are contemporary, based on traditional iconography,” he said.

“The exhibition initially started in Galeri Petronas in Kuala Lumpur last November and was officiated by the Sultanah of Terengganu, Sultanah Nur Zahirah.

“The idea of having it here was that since the collection is already here in Malaysia, why not bring it to Kuching, before returning the various pieces to their respective artists and owners after the tour is over. We are looking into the possibility of bringing it to other places in Asia Pacific, including perhaps China next year,” said Ong, who is co-curator of the exhibition with Manjari Nirula, the vice president of WCC-South Asia.

Those who managed to attend a special curatorial talk by Ong at the venue on Saturday were not only treated to in-depth knowledge and insights into the various artwork on display, but also had the opportunity to view and learn more about a number of pieces which were not put up for public viewing. 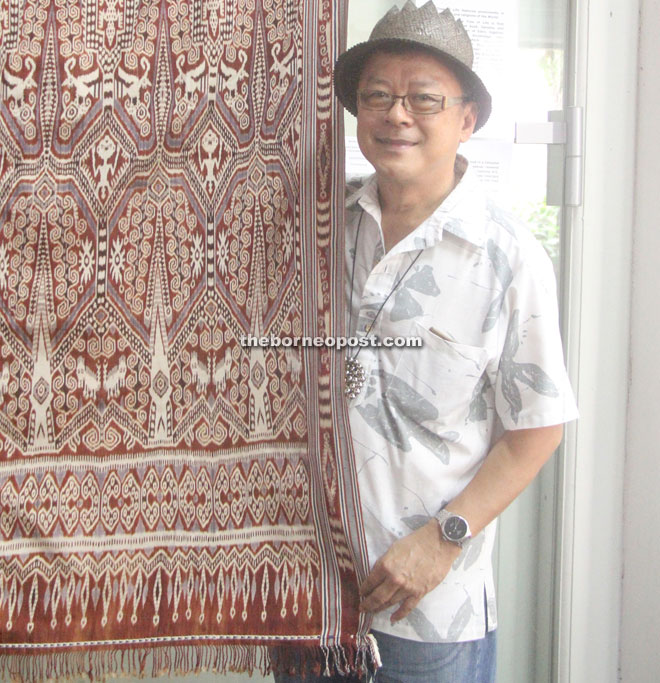 The Tree of Life is prominent in imagery and concepts which can be found across many cultures and religions across the world, according to a brief provided by the organisers.

In the Muslim world, the Tree of Life motif is found in the prayer rugs of Turkey, Iran and the Middle East. Many miniature paintings also depict the ‘Tuba’ tree which stood at the centre of the Islamic Paradise.

In Buddhism, the Bodhi tree (Tree of Enlightenment) or the sacred ‘asvattha tree’ (Ficus religiosa) is held in high regard as the Tree of Life — representing the ‘Tree at the Centre’ or the ‘still point of the turning world’ beneath which the Buddha overcame temptations and received enlightenment.

In Chinese culture, the peach tree and its fruit is seen as a symbol of longevity, due to its association with the Chinese folk deity Shou who is often depicted in statues and paintings as carrying a peach of Immortality in one of his hands. Shou is often presented with two other deities called Fu and Lu who represent blessings and prosperity respectively. Collectively, they are considered the three gods or three wise men of good fortune.

Here in Sarawak, the Tree of Life is also present in native culture and art. Among them are the ‘pucuk rebung’ (bamboo shoot) and sago palm tree motifs which can be found in the Iban pua kumbu, Ong highlighted. ‘Pucuk rebung’ represents new growth while the sago palm represents regeneration.

The Tree of Life is also an important character as well as spiritual symbol in Orang Ulu legends and myths. For example, in Kenyah folklore, the birth of mankind stems from the union of a Heavenly tree and an Earthly tree.

“So you can see in some of the bark paintings by one of the artists Mathew Ngau Jau who is Kenyah depicting the Tree of Life showing two trees intertwined, reflecting their traditional beliefs,” Ong pointed out.

The exhibition in Kuching also includes a number of contemporary art pieces by well-known Sarawakian and other Malaysian artists including Ramsay Ong, Michael Lim, Narong Daun, Mark Jong and Melton Kais, as well as traditional and contemporary artwork and crafts from Rumah Garie, the Tun Jugah Foundation, and Tanoti. 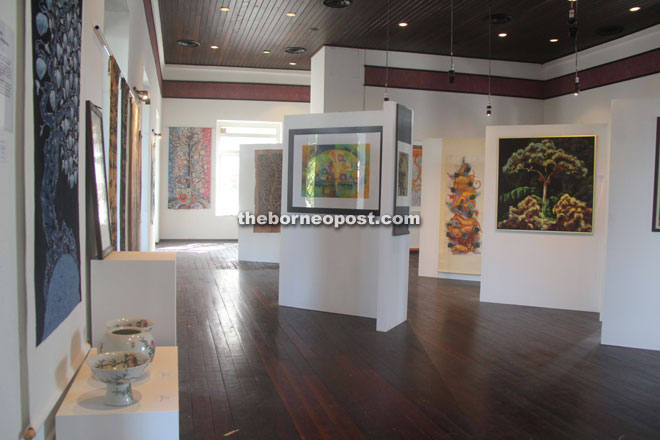 Artwork on display in the spacious gallery area on the upper floor.

The historical status of the Old Courthouse complex meant that the volunteers had to exercise extra caution in setting up the displays and exhibits in the two allocated galleries to maximise the use of space.

The high ceiling in the ground floor gallery were put to good use, with the larger textile pieces including antique robes and shawls, colourful wall hangings and handwoven saris draped on poles suspended between lofty pillars, so that their fine details could be admired in full.

Other displays saw the contemporary and traditional artwork arranged side by side to showcase the diversity and depth in how each artist or artisan expressed their creative visions through various mediums.

In the upstairs gallery, wide glass windows offered an abundance of natural lighting for visitors to appreciate painted works, intricate hand-cut paper and delicate hand-stitched motifs, with one artwork even presenting a magnifying glass to better appreciate its minute details.

The Old Courthouse complex’s present tenant art gallery/cafe ChinaHouse at Courthouse generously opened its doors to exhibitions for free, even though they are still in the process of setting up their own official opening scheduled for later this year. ChinaHouse also sponsored part of the reception costs during the exhibition’s launch here on Jan 30 which was officiated by the Yang Dipertua Negeri’s wife Toh Puan Dato Sri Raghad Kurdi Taib.

The exhibition opens daily from 10am until 5pm. Admission is free. It will be in Kuching until Feb 21 before moving to its next stop in Bikaner House in New Delhi, India in March. 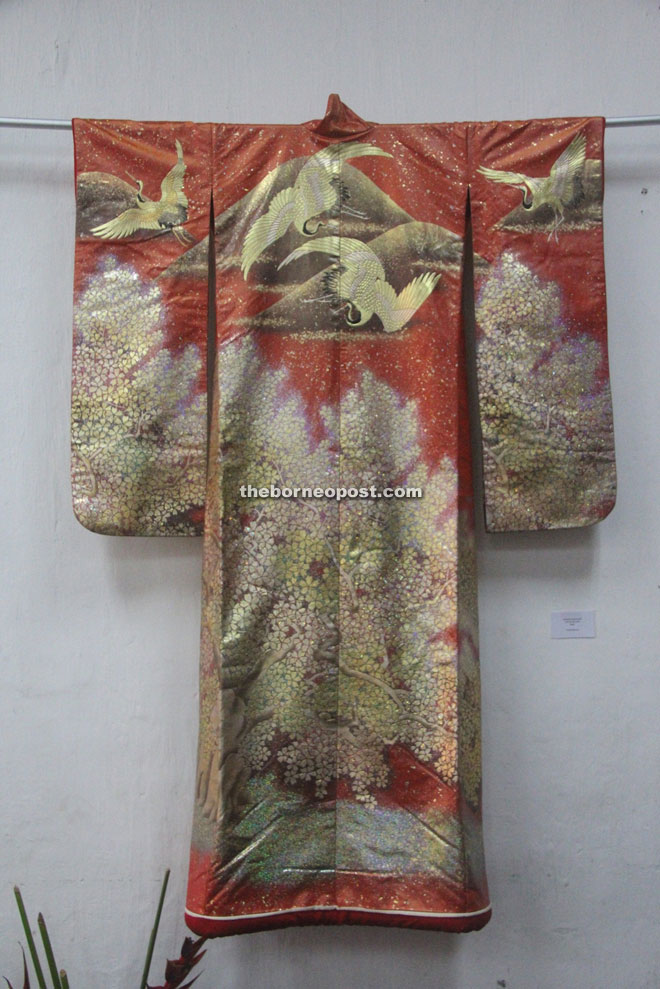 An elaborate Japanese wedding garment called a uchikake auspiciously decorated with a sakura tree in bloom and cranes in flight. This was worn by the bride. 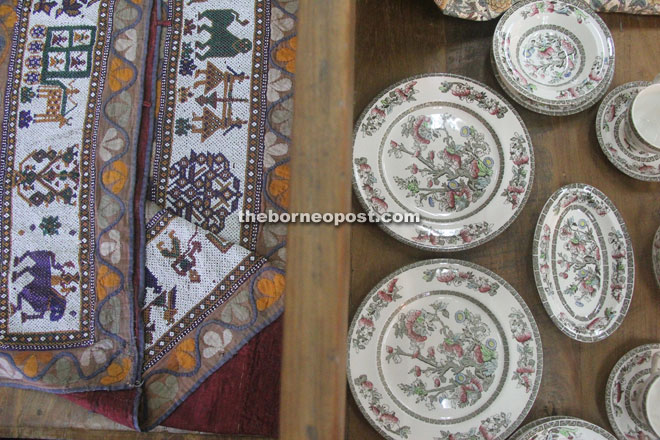 East meets west and traditional meets modern in this photo showing a traditional chakra glass beads panel by the Rabari people of Gujarat, India on the left, and a contemporary pottery and dining set made by Johnson Brothers, United Kingdom on the right. 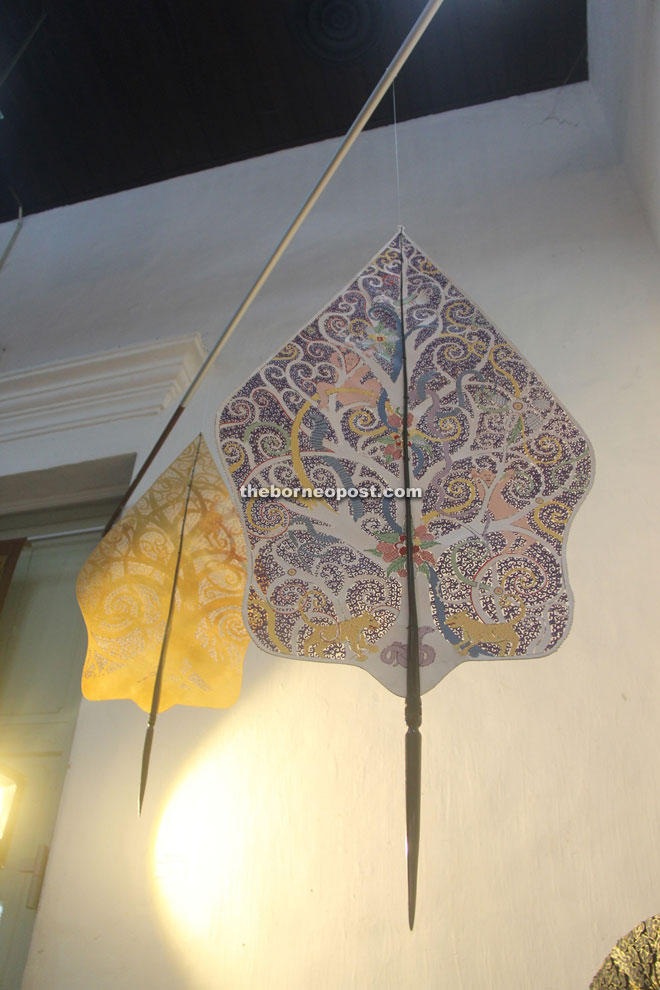 Contemporary ‘wayang kulit’ inspired by Tusau Padan (foreground) and Mathew Ngau Jau (background). It took an Indonesian craftsman three months to finish the project which was commissioned by Edric Ong. 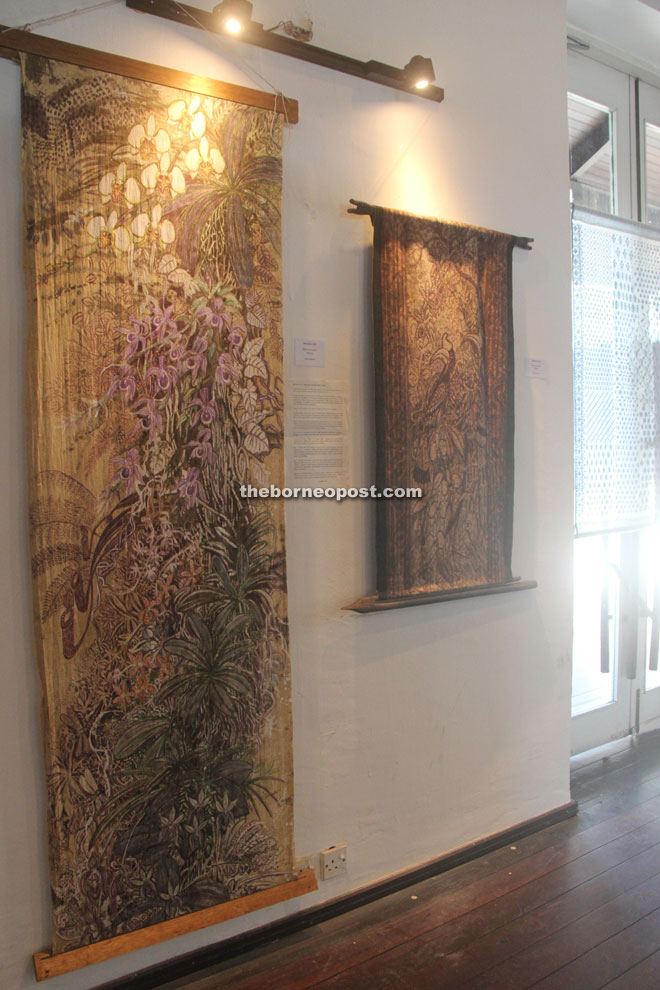