Saturday, June 19
You are at:Home»News»Sarawak»Alumni collect RM8,300 in memory of Brother Columba 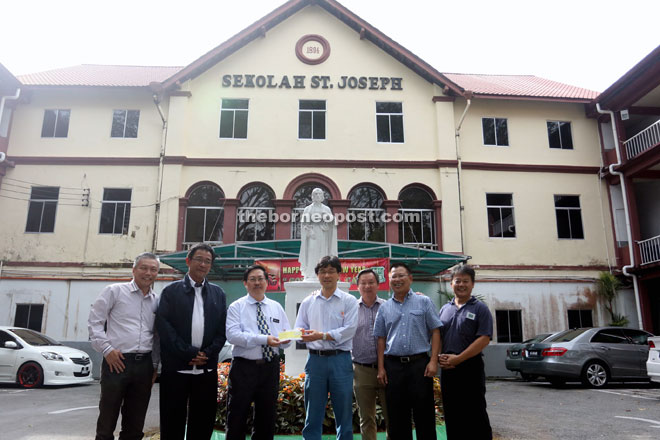 Kong (fourth right) handing over the cheque to Lau while Abdul Karim (second left) and others look on.

KUCHING: Members of St Joseph’s Class of 1977 (Form 5) successfully raised a total of RM8,300 during their recent reunion gathering in memory of Brother Columba Gleeson.

The donation will be distributed to charitable bodies associated with the late Brother Columba, including La Salle Foundation and Miguel House as well as any organisation linked to SMB St Joseph.

Assistant Housing Minister Datuk Abdul Karim Rahman Hamzah, who is a former student of the school, said the money was raised from the auction of paintings of one of his classmates apart from other donation drives.

“This is the gesture in memory of Brother Columba who was our former principal,” said Abdul Karim, who is also Asajaya assemblyman.

“The school had produced many prominent figures including State Public Works director Zuraimi Sabki, Universiti Malaysia Sarawak (Unimas) vice-chancellor Datuk Prof Mohd Kadim Suaidi to name a few from Class of 1977,” he said after witnessing the handing over of the cheque to the school principal Thomas Lau by Dr Dennis Kong, an alumnus.

The alumni also recorded their condolence in memory of Brother Columba during the visit.

Meanwhile, Lau expressed his gratitude for the gesture by the alumni.

“Thank you very much to the batch of 1977 and in fact I am very happy that once in a while former students come back to help the school one way or another, some contributed to the Parents-Teachers Association,” he said.

“For late Brother Columba, we cannot repay him for what he had done.

“He had done something really significant, he really devoted his whole life to his career of educating us who are very far away from his home town in Ireland,” said Kong who was the organiser for the latest reunion which was held on Feb 10.