Sunday, August 1
You are at:Home»News»Sarawak»Chinese acrobats wow city folk with agility and skills 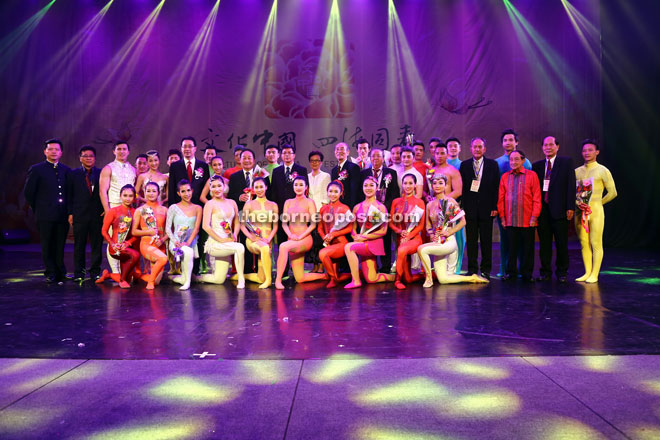 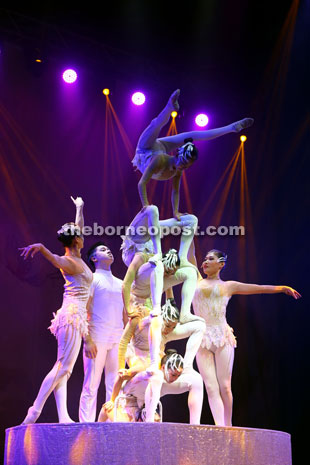 Putting on a spectacular show.

KUCHING: The Chinese Acrobatic Troupe from Guangzhou, China, put on a spectacular show and played to a full house at Borneo Convention Centre Kuching (BCCK) on Tuesday.

‘Culture of China – Festival of Spring’ was brought in by the Federation of Chinese Associations of Kuching, Samarahan and Serian Division in collaboration with the Consulate-General of the People’s Republic of China in Kuching and China Overseas Exchange Association.

The acrobatic troupe, which is one of the best in China, recently performed at the grand Lunar New Year Festival Gala 2016 hosted by CCTV. They also performed in the opening of the Beijing Olympic Games in 2008.

Wong, in his speech, said this cultural event reflected the close relationship between China and Malaysia, particularly Sarawak.

“All forms of art, be it performing, music, or dance transcend boundaries, territorial divisions and racial lines. Tonight we have people of various ethnicities and races here to witness this great performance,” he said.

“We also welcome experts from China to share their knowledge and technology in order to help us modernise in fields such as agriculture, education, technology, and management.”

Quoting Chinese president Xi Jinping on Napolean Bonaparte, who once said that China ‘is a sleeping lion, and when China wakes up, the world will shake’, Wong agreed the lion of China had awaken.

“The president has emphasised that we are living in one world, where we need to help the world progress in various aspects and contribute to improve the livelihood of the people,” he said. 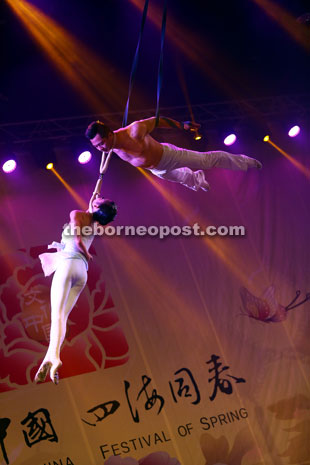 Awesome display of strength, agility and grace by the acrobats.

Meanwhile, Fu said friendly relations between the two countries lay in the heart of the people.

“Cultural exchange is the best way for deepening the understanding and friendship among people in different countries.”

Lu, who said he was delighted to see a full house, encouraged youths from all races in the state to appreciate the beauty of traditional Chinese cultural values.

“We hope to see more cultural-interaction activities in order to enhance understanding, harmony, and peace in Malaysia.”