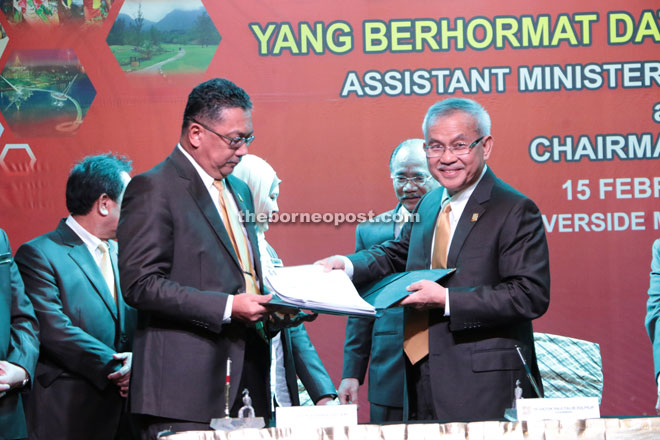 Talib (right) hands over the SEDC management contract to one of the divisional heads.

KUCHING: Sarawak Economic Development Corporation (SEDC) is looking to invest in new sectors such as oil and gas, as well as to further expand its existing presence in tourism, property development and agriculture.

Its chairman Assistant Minister of Tourism Datuk Talib Zulpilip said its involvement in these existing sectors included the development of a pineapple plantation in Igan, as well as major residential, commercial and real estate projects in Pantai Damai, Matang and Pending here.

“The construction of the Golden Bridge across Sungai Sarawak and the new SEDC headquarters at Isthmus Kuching is progressing well, with both projects expected to be completed by the year-end,” he revealed.

In addition to these projects, he said the Grand Margherita Hotel would also be getting a facelift with the upgrading of its Sadong Wing comprising 144 guest rooms and outdoor poolside dining area; while in Lundu, Miri and Sri Aman, there would be new business premises slated for completion within this year.

“SEDC will continue to pursue its objective of providing assistance to local entrepreneurs through various schemes and programmes including financial aid, business premises with affordable rental structure, and capacity-building courses and seminars,” he said, adding that the corporation managed to reach out to 1,717 beneficiaries of its socio-economic schemes and programmes across the state last year.

In this respect, Talib reminded SEDC staff against resting on their laurels.

Nevertheless, he also commended them for their contribution to the fine performance of the corporation over the years.

In terms of financial performance, SEDC has managed to remain in the black for the 13th consecutive year, despite a turbulent and unpredictable year — both for Malaysia and the world.

Last year, it chalked up unaudited profit before tax (PBT) of RM97.96 million at corporation level, and RM202.47 million at group level — 93 per cent higher than the budgeted PBT of RM105.12 million — with associate companies namely the CMSB Group, Agro-Food and Tourism and Leisure Group of Companies being the major contributors.

“This is the result of hard work, combined with strong integrity, good governance and sound management fundamentals,” said Talib.

The annual presidential address has always been part of SEDC’s corporate culture where the chairman briefs his staff on the corporation’s performance and achievements over the past year and also its future plans.

Over 300 staff members of SEDC and chief executives of its group of companies attended the event, where SEDC divisional heads also signed a management contract to ‘seal’ their commitment towards achieving their respective targets for this year.

One of the highlights this year was the launch of the SEDC Corporate Balanced Score Card (BSC).

The adoption of this system is meant as a strategic management tool to ensure that SEDC’s strategic plans, implementation and monitoring would be systematically established using the BSC methodology based on four key areas — finance, customers, internal process and organisational capacity.