Wednesday, February 1
You are at:Home»News»Nation»Najib hopes M’sia can produce innovations like Apple, Tesla
For the freshest news, join The Borneo Post's Telegram Channel and The Borneo Post on Newswav. 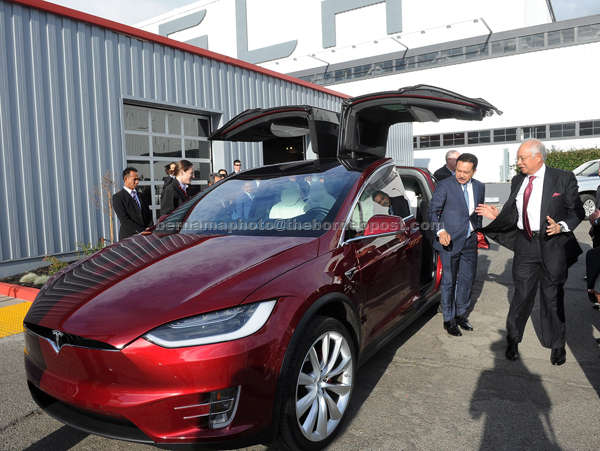 Najib (right) seems excited after having a test drive on the Tesla Model X during a tour of the electric car manufacturer plant. — Bernama photo

KUALA LUMPUR: Datuk Seri Najib Tun Razak hopes Malaysia can one day produce innovations like companies such as Apple and electric car manufacturer Tesla in the United States (US).

The Prime Minister said there were many interesting and sophisticated technologies developed by the two companies which will shape the future world.

“In Malaysia, the government is supporting start-ups as well as research centres for high technology and knowledge related industries,” he said in his  latest posting on his blog NajibRazak.com yesterday.

Najib, who is on a working visit to the US, visited Apple, the leading technology giant in Cuppertino, California and held discussions with Apple chief operating officer, Jeff Williams.

He also visited Tesla, the electric car manufacturer in Palo Alto in California and was given a briefing by Tesla vice-president Diarmuid O’Connell.

Najib said among the topics discussed during the visit to Apple headquarters was the role of the company on education in Malaysia.

“We are looking at the opportunity of an Apple Research and Development Centre for the Asia-Pacific in Malaysia, to focus on innovative ways of using mobile technology to promote learning among children.

“Apart from that, to further expand the potential of young minds in Malaysia, we will also look at setting up an Apple Excellence Development Centre to identify, educate and produce local application developers,” he said.

According to the prime minister, local application developers would be creating applications for Apple Store suitable for learning and the local market.

Touching on Tesla, the Prime Minister said he was given the honour to test drive the company’s latest electric car named X.

“The company also agreed to provide Malaysia with at least 100 units of Model S, the first premium sedan electric car in the world. We will be the first Asean country to receive Tesla cars,” he said.

Najib arrived in the US on Feb 11 for the visit, which included attending the US-Asean Summit in Sunnylands, California. — Bernama