Sunday, July 12
You are at:Home»News»Sarawak»BN pick for Bukit Semuja for CM to decide — Manyin 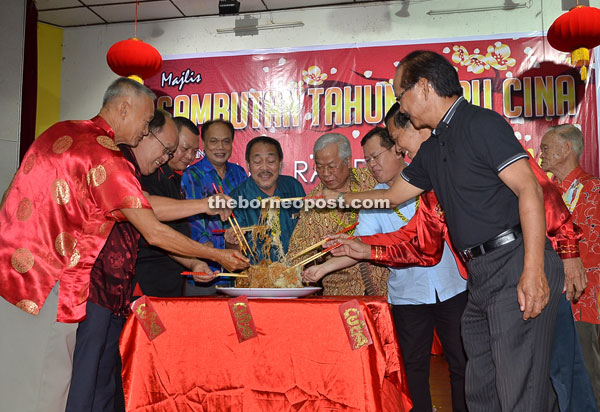 The Parti Pesaka Bumiputera Bersatu (PBB) vice-president said the BN was definitely going to contest in three other seats in Serian Division, namely Tebedu, Kedup and Tarat, but the candidate for Bukit Semuja was up to Adenan to decide.

“We hope the local communities in Serian, be they Chinese, Malay, Iban or Bidayuh, will unite and stand behind us because if one of the seats is lost to the opposition it would not be easy for Serian to get the development it needs,” Manyin said at the Serian Rando/Maksak Chinese New Year dinner held at the community hall here on Friday.

PBB is actively claiming the seat, and has even set up the PBB Bukit Semuja pro tem committee headed by Gabriel Kajeh, one of potential candidates to contest the seat.

Sarawak United People’s Party (SUPP) is said to be interested in the seat, and its deputy president Datuk Seri Richard Riot was recently quoted as saying the party had identified at least three candidates for Bukit Semuja.

On other matters, Manyin, who is also Tebedu assemblyman, announced that Adenan and Prime Minister Datuk Seri Najib Tun Razak would launch the third series of the Pan Borneo Highway, a 74km stretch from Serian to Pantu, on March 13.

“Another piece of good news is that we will also be launching the Serian Administrative State Complex and Serian New Township some time in April this year,” he added.

Touching on the Chinese New Year dinner, Manyin said that he was ‘happy with the response’.

“This is the first time the Serian Rando/Maksak is organising the gathering. I am happy to see such a good turnout. I hope the Chinese community will continue to stand behind the BN government.

“With Serian being a new division, standing behind the BN government will definitely benefit the local people,” Manyin said.