Friday, October 23
You are at:Home»Features»Limbang riding the crest of development LIMBANG constituency is unique. It can be likened to an island separated from the Sarawak land mass by its borders with Brunei Darusalam to the west and east, Lawas District to the southeast and Miri District at the south and southeast.

With two state constituencies — Bukit Kota and Batu Danau — sandwiched between the Sultanate of Brunei and its Temburong District, one must have a passport to travel into or out of Limbang from any part of Malaysia.

Bukit Kota, centred around Limbang town, has 16,316 registered voters – Malay Bumiputeras over 55 per cent, Chinese (40 per cent) with other Bumiputera groups making up the rest. This is home to the biggest Kedayan population in Sarawak.

With a distinctive Brunei Malay language, this multiracial District was mired in economic backwaters until the advent of a wave of transformation and increasing connectivity via land induced greater physical, socioeconomic and mindset changes.

Things are looking up for Limbang where the buffalo is an icon.

The opening of the RM21 million Friendship Bridge at Pandaruan is a symbol of Malaysian-Brunei cooperation and also the last piece of the Pan Borneo jigsaw. It unleashes the economic potential of the Limbang Basin and promotes regional travels and growth, further boosted by the extension of the opening hours of the CIQs from 10pm to midnight.

Limbang is a melting pot of ethnicities and cultures. With its strategic location next to Brunei, Labuan, Lawas and Sabah, this bustling river port boasts a crowd-pulling cultural festival – the Pesta Limbang which draws tens of thousands of locals and visitors alike to its shores every year. The iconic buffalo races are the highlights of Pesta Babulang.

In Batu Danau, the iconic buffalo races are the highlights of the annual Pesta Babulang.

Substantial inflow of funds, translating into welcomed socioeconomic changes through development projects — major and minor – have brought in a heightened sense of optimism and new found vibrancy, putting to rest the former image of Limbang as an economic backwater.

The latest mega project is the RM150 million Limbang Bridge which will slash by half the travelling time to barely 45 minutes from Limbang to the Brunean capital of Bandar Seri Begawan. This is a welcomed development for visitors from Brunei and vice-versa.

Now, travellers have to pass through the Tedungan CIQ and Batu Danau region.

The distance will also be reduced to less than 20km from the present 50 km from Limbang town to the Malaysian-Brunei border.

The villagers are happy that the much-awaited road project, linking Pangkalan Rejab Buang Abai, Meritam and Projek Jalanraya Jalan Ipai Pendam, has taken off, bringing their villages within minutes from Limbang town, or to the border, although there have been some delays.

The past five years have left an indelible footprint on the implementation of basic infrastructure and amenities under the government’s transformation programme — from the coast to the interior. Villagers from the delta to the upper reaches of the Limbang River have benefited from better road communications, provision of rural electricity and expansion of rural water supply.

Limbang also stands to benefit from proposed halal food production in a bilateral collaboration between Malaysian and Brunei.

Second Minister of Resource Planning and Environment Datuk Amar Awang Tengah Ali Hasan said the win-win situation would boost the local economy and create jobs and business opportunities on both sides of the border. 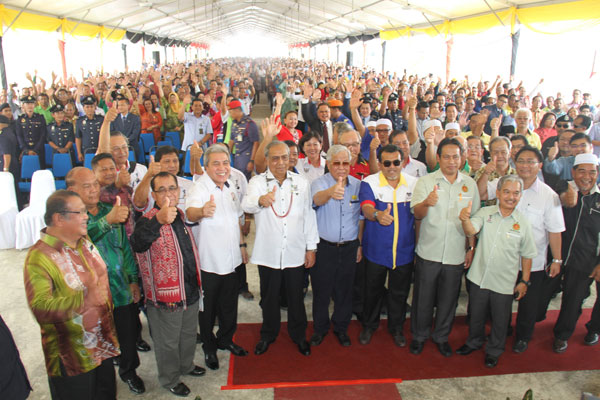 A united Limbang BN front in support of Chief Minister Adenan to bring about greater progress.

Batu Danau constituency, represented by incumbent Paulus Palu Gumbang, is thriving with agriculture, livestock farming, tourism, logging and a progressive oil palm plantation industry. With about 8,661 voters as at the third quarter of 2015, this rural constituency is eagerly anticipating the inflow of a fair share of rural development funds.

Paulus is looking forward to a third term, saying there is still much to be done in Batu Danau.

A local resident, Ibrahim Tapa, said the people of Limbang were looking forward to more development and hoping the momentum would be maintained as “there is much to be done”.

“Development can be accelerated, particularly when the Limbang Bridge project is completed,” he suggested.

To offset the higher costs of goods and services and attract more people to Limbang, he hoped the state and federal governments would consider making Limbang a duty-free port because of its strategic location.

The 44-year-old from Kampung Sayung is looking forward to the implementation of the 1Malaysia Night Market in Limbang this year, and the upgrading of the Limbang Tamu Market, schools, roads and other infrastructure.

Meanwhile Jun Silah, PBB Batu Danau branch deputy chairman, said the constituents are hopeful more development funds from the government would be allocated to the area through Paulus as the wakil rakyat.

He said Paulus from Teras is expected to secure another strong mandate in the upcoming polls, adding that this would translate into the big electoral endorsement  sought by Chief Minister Datuk Patinggi Tan Sri Adenan Satem.

“Batu Danau can look forward to more areas being connected with water and electricity supplies apart from other infrastructural development, including repairs for schools and other necessities which our elected representative has brought up to the authorities,” Silah said.