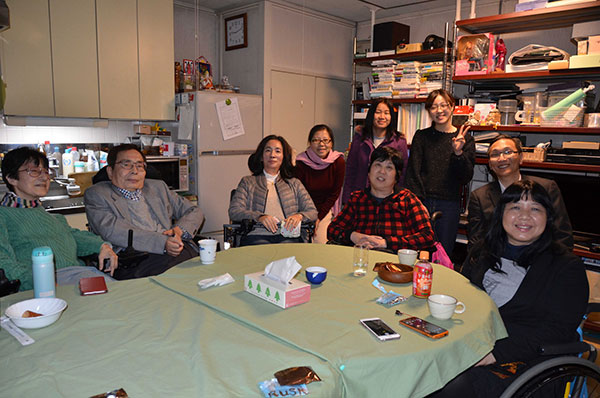 The writer and other guests at the home of Shoji and Yukiko Nakanishi.

THE Japanese have an eye for detail. This is evident from the many email exchanges I had with Yoko Nishimura, head of the Office of International Cooperation of the National Rehabilitation Center for Persons with Disabilities, Japan. She was the contact person for the seminar I was attending in Tokyo.

Every aspect of our trip was impeccably arranged from the moment we touched down at the airport right up to the conclusion of the seminar. She made sure that the room we were put up in and the transport to take us to the seminar venue were suitable.

To ensure that I was aware how the seminar would proceed, she provided me with the seating plan, schedule and protocols weeks in advance. This is the most well-organised seminar I have ever attended where everything was planned far ahead.

When we checked out from the hotel the morning after the seminar, we were caught in a drizzle that steadily turned into a downpour. With two suitcases in tow, my wife and I were desperately looking for a subway station to catch a train to Takahata where we were to stay for the rest of our trip.

We found the station but the only way down was a flight of stairs. As my wife and I contemplated our next move, a man in an office suit walked in with an umbrella.

“Sumimasen,” I greeted him and then asked, “escalator?”

He understood what I was looking for and pointed us in the direction where I assumed a station with an escalator was located.

Not assured that we could find our way there, he said, “Come” and gestured for us to follow him.

It was still raining. He offered to shelter me with his umbrella at the expense of being drenched himself. I told him it was not necessary as the down jacket I was wearing is water repellent. The distance to the next station was about 200 metres. By the time we got there, he too was partially drenched. He only left after making sure we knew where the train platform was.

This kindness is not an exception in Tokyo the entire time we were there. There were many other instances when strangers unreservedly went out of their way to take us to where we wanted to go even though all we were asking for were directions.

I have since learnt that if there is one word travellers to Japan need to know and use, it must be sumimasen. It basically means “Excuse me” or “I’m sorry”. But this word can also be used to convey thanks for troubling someone or to get attention.

This multifunction word is as useful as a Swiss Army knife. It has gotten my wife and me out of many sticky situations like the one I just recounted. During our six-day stay in Japan, I have used this word more times than I can remember.

If strangers were ever so willing to assist, what’s more friends in Japan who had made plans to make my trip a memorable one. After we left our luggage at our accommodation at Takahata, we met up with Dr Kenji Kuno again. We had a scrumptious dinner with him on the day we arrived.

He took us on a walking tour around Shinjuku, the most popular business, shopping and entertainment district in Tokyo all wrapped into one. The ubiquitous glitzy neon signs and the sheer number of people out and about were astonishing. I have seen nothing like this anywhere in Malaysia.

And who would have guessed that nestled amongst this modernity were narrow lanes lined with small and dingy eateries and bars that have gone unchanged for the past 50 years? Although we had difficulty manoeuvring through the crowd, being able to experience this other side of Shinjuku was priceless. Each time I think of this place, I can still smell the appetising aroma of yakitori wafting through the alleys.

I estimated that at the end of the excursion, we had traversed over 8km by foot with Dr Kuno pushing my wheelchair most of the time. That must have been the longest distance I have ever covered in a single day. It must have been tiring for him. I know I was truly worn out by the time we parted ways. I could not have asked for more from a friend who sacrificed a precious weekend with his family to show us around and more.

We got to appreciate more of the Japanese generosity at a welcome dinner hosted by Shoji and Yukiko Nakanishi at their home. They are both veterans in the global disability rights movement. The invitation was therefore a great honour for us. Altogether, there were 10 old and new friends gathered around the dining table enjoying sushi made with the freshest seafood from the Tsukiji Market and a simmering pot of home-cooked oden, which is usually served during winter.

I was asked what my plans were for the one more day we had in Tokyo. When they heard we were going to Odaiba to visit the Legoland Discovery Center, they checked the best train routes for us to take. We spent a good part of the evening talking about my itinerary and then my trip to the airport.

That was a complicated one. The original plan was for us to catch the Narita Express at Shinjuku Station. However, the station is such a massive complex that they were afraid we would have trouble finding our way from one platform to another and may be late in checking in at the airport.

After considering several options, our newfound friend Masami Morigami offered to find out if she could change our pre-bought train tickets for a direct trip to the airport. When she managed to to do that, she booked a taxi to pick us up at 4.55am to take us to the train station in order for us to be in time for our 11am flight. She even refused to accept payment for the extra she had to fork out for the new tickets.

As expected, everything went according to plan. We arrived at the airport with ample time to spare. This Japanese hospitality for you. They are more than willing to walk an extra mile or two to help friends and strangers alike just to make sure everything is in order. They place pride and professionalism in doing even the simplest of tasks. Even though I hardly spoke the language, I was always comforted by the fact that help was just a sumimasen away.