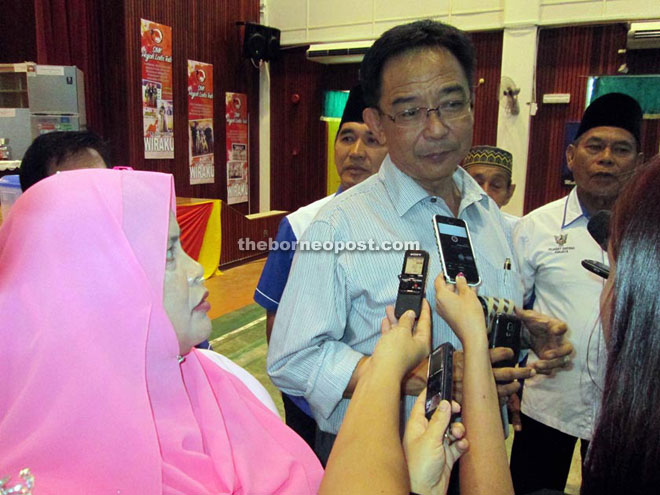 Abdul Karim being surrounded by reporters after the handover at SMK Hajah Laila Taib. On his right is Rubiah. — Photo by Jeffery Mostapa

ASAJAYA: The Barisan Nasional (BN) election machinery in Asajaya will not be sitting on their laurels, despite not knowing who the party will face in the upcoming state election.

According to Parti Pesaka Bumiputera Bersatu (PBB) supreme council member Assistant Minister of Youth Development Datuk Abdul Karim Rahman Hamzah, those involved in the election machinery have been attending various courses and briefings to prepare them for the polls.

“All those from Asajaya PBB branch, including members from the Women and Youth wings, are now already on the ground,” he said after witnessing the handover of the 1Azam Niaga assistance programme at SMK Hajah Laila Taib yesterday.

On the event, Abdul Karim — who is Asajaya assemblyman — the aid programme for entrepreneurs in Asajaya was spearheaded by Sarawak Economic Development Corporation (SEDC), which he also commended for its strict vetting procedures.

“This is vital to ensure that each of the recipients, who are also enrolled under the e-Kasih system, are genuine entrepreneurs who have a true vision of expanding and improving their business,” he pointed out.

On another note, Karim who is also Assistant Minister of Housing, said the request for Asajaya to have its own Fire and Rescue Department station was still awaiting approval from the top authorities. He cited lack of financial resources and the location of the existing station in Muara Tuang as among the reasons for the delay of the project’s nod.

“For the department to build a new station, they (authorities) must consider the distance and the area’s population away from the current station in Muara Tuang.”

However, the growing number of houses in Asajaya, Abdul Karim said, should justify the proposal, which he assured the local folk that he would pursue the matter personally.

Meanwhile, he said traders selling local products along the main road leading to Asajaya would be relocated to a new trading site very soon.

“The new trading area is almost completed but we have to relook into the number of stalls as we have found out that we have more traders than anticipated earlier.

There are also proposals for other areas to have similar trading centres, among them Kampung Melayu and areas after the Batang Sadong Bridge, and also those before the Kota Samarahan Bridge, Abdul Karim said.

“These areas are developing fast, which is why a trading centre would augur well for local entrepreneurs.”