Friday, February 3
You are at:Home»Columns»Nature Matters»A palm hotspot
For the freshest news, join The Borneo Post's Telegram Channel and The Borneo Post on Newswav. 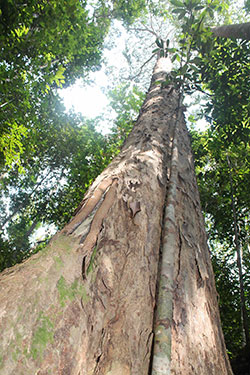 THE celebrated botanist Odoardo Beccari in ‘Wandering in the Great Forests of Borneo’ created vivid images of his 1865 travels throughout Sarawak. His extended collecting trips to Matang, near present day Kubah National Park, took days of tramping over hills, wading through swamps and rivers, crawling through thick underbrush and cutting short-lived trails.

He also opted, as advised by residents, to travel by boat when bringing supplies for an extended stay at Vallombrosa, the Malay-style home he had built on Matang. However, even this journey was lengthy and tough.

This formerly remote region is now a mere 35km or 45 minutes from Kuching.

Frogs and palms are, as in Beccari’s day, synonymous with forests in and around Kubah National Park.

Not so long ago, I had the opportunity to get in touch with Mother Nature during a visit to this pocket of wild and the palms.

Beccari described several palms and Dr Katherine Pearce in her 1992 study, ‘The Palms of Kubah National Park’, identified 86 species within the park alone, plus an additional nine species found outside its boundary.

Of these, 16 species are only found in Borneo. This park is without a doubt a palm hotspot as almost half of all species found in Sarawak are here.

The Palmetum, a few steps from the park headquarters, celebrates the park’s palm diversity. Signboards regaling visitors with scientific and local information about uses and beliefs add depth to the visit.

The striking parasol palm (Licuala orbicularis) looks like an umbrella. Not surprisingly the undivided frond can be and was used as one.

This spectacular stemless palm, a member of the palm Arecaceae family, with large fan-shaped leaves is endemic to Sarawak and grows only in a few locations including Kubah National Park.

Biru bulat, Biru ruai or berupat, as it is known in Iban, is adapted to rainy weather and is an understorey species in the mixed dipterocarp forests requiring indirect light.

It is found at altitudes from 30 to 330 metres on well-drained slightly acidic soils.

The leaves are used for wrapping, making umbrellas and for atap roofs. Pearce in her 1992 report indicated that this palm is endangered due to habitat destruction as the forest is logged or the land use is changed. Another threat is the collection of seeds for plant nurseries.

Eventually the many attractions of Kubah National Park drew us away from the Palmetum. Palms were always on our mind though, as they dotted the landscape as we hiked along the shady, undulating trail towards the waterfall.

The towering dipterocarp trees, which enveloped the lower slopes of Gunung Serapi are awe-inspiring.

The mixed dipterocarp forest, which covers much of Kubah National Park, used to cover a vast area of Sarawak.

However, changing land use patterns for urban and agriculture expansion as well harvesting the trees for their timber has led to a reduction in the area under this forest.

The name is from the dominant family, Dipterocarpaceae, meaning two-winged fruit, and it reaches 30 to 50 metres in height.

However, an emergent could stand at an astounding 60 metres. Gigantic trees dominate the upper canopy, but there are an estimated 2,000 species making up this forest type.

You don’t need to be a botanist to identify the diversity of this forest type.

The vast array of leaf shapes, bark and plant types tell all visitors, at almost a single glance, that there is no doubt this forest type is varied.

Gunung Serapi, a highly visible landform when approached from land and sea, stands at 911 metres.

However, only the lower slopes of this predominantly sandstone-mountain were, in 1995, incorporated into this approximate 22 square km park.

To reach the Rayu Waterfalls, we picked up the aptly named Waterfalls Trail.

This trail crosses a swampy area before a slow incline to the falls.

The refreshingly cool spray of the water droplets on our faces and merry stream tumbling down the mountain renewed us spiritually and physically. 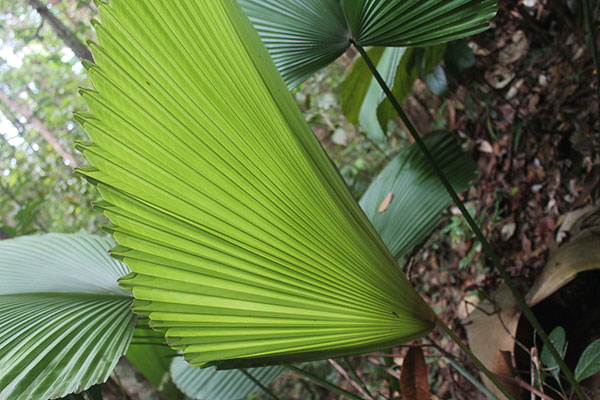