Wednesday, July 8
You are at:Home»News»Sarawak»A rude awakening for Kuching folk 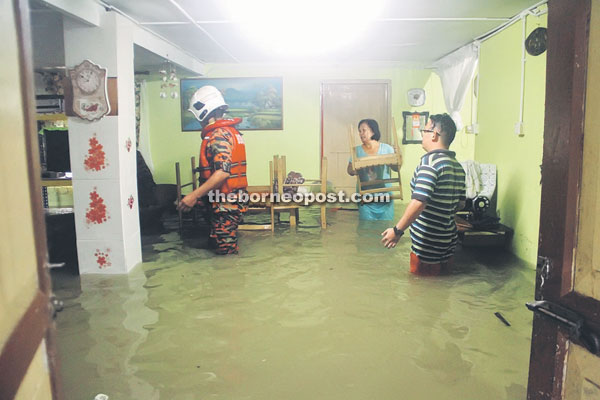 A firefighter helps Kampung Tabuan Dayak residents save their belongings. — Photos by Chimon Upon 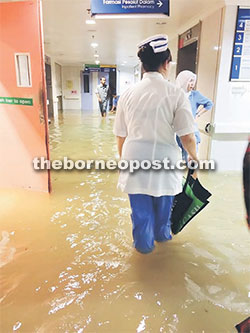 SGH staff wade through a corridor.

KUCHING: The majority of  folk here had a rude shock yesterday when flash floods inundated many parts of the state capital following the downpour from the wee hours until around 10am.

The Internet was abuzz with shocking images of vehicles stranded in flood waters in various parts of the city, homes in Kampung Tabuan Dayak filled with water up to waist level, as well as staff and patients wading through corridors on the ground floor of Sarawak General Hospital (SGH).

State Health director Datu Dr Zulkifkli Jantan said no major damage was reported and assured that services at the hospital were not affected.

In a posting on Facebook, Health Ministry director-general Datuk Dr Hisham Abdullah commended the efforts of SGH staff who helped  relocate patients to the upper floors.

“In times like this, I hope all of our staff would persevere and do their best,” he said.

“Undoubtedly natural occurrences such as floods will, to some extent, be a test of our resilience and dedication and our own state of preparedness.”

Reminding the hospital staff to ensure both the safety of patients and themselves, Dr Hisham called on SGH to secure all medical records and support equipment to ensure that treatment and patient care would not be interrupted.

“I would like to express the Ministry of Health’s gratitude to all of you who have to performed your duties under these trying circumstances. We pray for your safety and may these challenges spur you to higher levels of dedication to public service,” he said, adding that in the past, the hospital staff had faced and overcome such challenges well.

Meanwhile, Fire and Rescue Department (Bomba) state deputy director (operations) Farhan Sufyan said in a statement that Kuching had experienced heavy rain from 3am and the department had received 17 distress calls due to flash floods including a landslide at Mile 18 Jalan Serian-Tebedu.

He said Bomba had mobilised personnel to assist at SGH as well as to evacuate flood victims from Kampung Tabuan Dayak to a temporary relief centre at SMK Tabuan Jaya.

Bomba also received reports of water levels rising to at least one foot in the surrounding areas of Batu Lintang, Satok, Padang Merdeka and Taman Malihah, he said.

“Water levels were also reported to be rising in Kampung Segong, Bau. However, no evacuation of flood victims was required,” he said.

He said despite water levels receding in Sungai Sarawak from 11am, Bomba would continue to monitor the situation here as well as at rivers in Serian and Kota Samarahan. 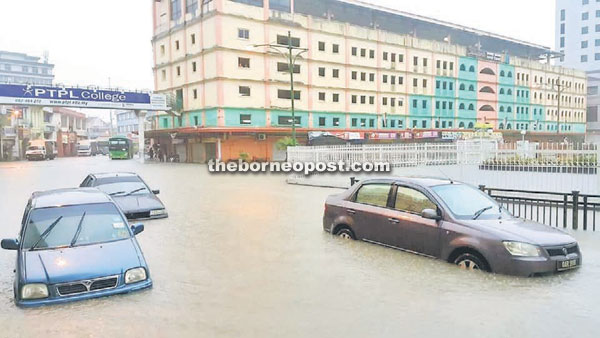