Wednesday, February 1
You are at:Home»News»Sabah»Orphaned elephants puzzle
For the freshest news, join The Borneo Post's Telegram Channel and The Borneo Post on Newswav. 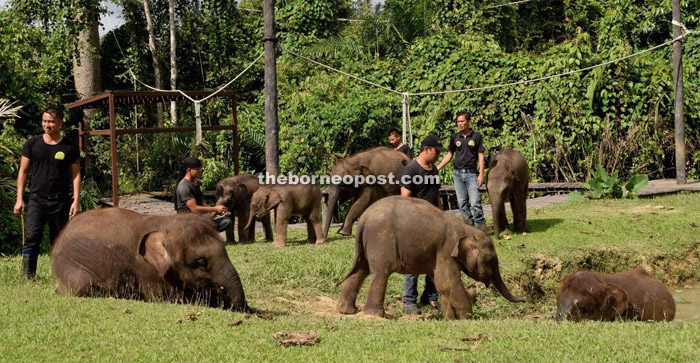 The number of baby elephants rescued has been increasing steadily in the past three years and the trend is worrying and disturbing, said SWD Director William Baya.

William disclosed in a statement yesterday that for the past three years Sabah Wildlife Department’s Wildlife Rescue Unit (WRU) has been working around the clock rescuing and caring for the baby elephants as surrogate mothers.

“I am extremely concerned about what is happening to our Bornean Elephant population in the wild. For the past three years we have rescued 15 baby elephants, all below one year old that were found wandering alone.

“The numbers are actually on the increase when in 2013 we rescued two babies, followed by three babies the following year and in 2015, we rescued a record of eight babies.

“Though 2016 has just dawned, we have already rescued two baby elephants just in the month of February alone. All these babies were rescued throughout the east coast of Sabah in known human-elephant conflict areas in Tawau, Lahad Datu, Telupid, Kinabatangan and Sandakan,” he pointed out.

According to William, the increasing loss and further fragmentation of elephant habitat, reports of human-elephant conflict has been skyrocketing to point that the Sabah Wildlife department’s effort to manage this has been has been extremely challenging.

Translocation of problematic elephants to other areas used to work very well before, maybe 10 years ago but now except for a few individuals, it failed to solve the problem for most of the others, he lamented.

“Either the elephants that we translocated, go on causing conflict with humans in the new place that we send them or they actually go back to the same area where they were initially causing problems. Due to this fact, villagers are getting frustrated and taking the law into their own hands, shooting and even poisoning elephant herds,” he claimed.

Another challenge the department is facing now is taking care of the rescued baby elephants.

“We have a very professional and hardworking team of veterinarians and rangers from the Wildlife Rescue Unit that spend 24 hours a day nursing, feeding and playing ‘surrogate mother’ to these poor babies,” he said.

William added that the cost of bringing up rescued baby elephants is not cheap as the milk formula alone costs between RM200 to RM250 per baby elephant per day.

“Now that’s a hefty monthly bill of around RM40,000 to RM45,000 per month or more than RM500,000 per year just on feeding cost. This does not include cost of salaries and allowance that we need to pay our staff for round-the-clock 24-hour care of the baby elephants ,” he said.

“I would sincerely like to call upon corporate bodies in Sabah or even throughout Malaysia that might have a genuine interest in assisting Sabah Wildlife Department to fund the daily care and feeding of these poor baby elephants or even adopt these baby elephants in a similar way as how a UK based NGO, Orangutan Appeal UK does it for the Orangutans in Sepilok,” he said.

Meanwhile, Assistant Director of the Sabah Wildlife Department Dr Sen Nathan added that this comes in the wake of an equally alarming scientific paper published in an online journal, Biological Conservation by a team of scientists from the UK and Sabah titled: Habitat fragmentation and genetic diversity in natural populations of the Bornean elephant: Implications for conservation.

“Its main conclusion about Bornean elephants show low but significant degree of genetic differentiation among populations, and securing connectivity between spatially distinct populations and avoiding further fragmentation within populations being an absolute necessity if we want to conserve the species,” Dr Sen pointed out.

“Steps must be taken right now and not 20 years down the road on both in-situ (in natural habitat) and ex-situ (managed/captive breeding) conservation to save our elephants in Sabah,” added Dr Sen.

He disclosed that there are four WRU Rangers who are full-time and two part-time care givers to the orphaned baby elephants. They act as surrogate mothers and are with them 24/7.