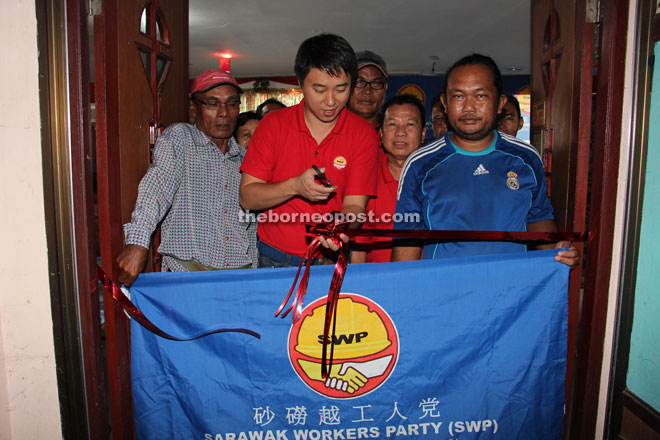 Larry cuts the ribbon to officiate at the ceremony.

In his brief remarks, Larry said the service centre was part of his preparation for the upcoming state election.

“At this centre, which is open from 9am to 1.30am and from 2pm to 5pm, our staff will register new members. More importantly, it’s open to everybody wishing to check where their polling district is. This is to make sure that they vote at the right station,” he said.

He also informed that he would contest in Bukit Goram in the coming election and called on the people to give him their support.

“In the coming election, I offer myself to contest Bukit Goram. In the 2011 state election because of political differences with the president of Parti Rakyat Sarawak (PRS) Tan Sri Datuk Amar Dr James Masing, I was dropped from contesting. This time around, I formed SWP to contest and I appeal to all of you to support me in the election.

“Give me the chance to serve you. I’m not a stranger to constituents here because all these years, I have never failed to serve those in need through my socio-education works. The Larry Sng Education Fund was established in 2011 and throughout the years, we have assisted patients referred to Sibu General Hospital as well as families of the deceased to lessen their burden. Apart from that, I’ve financially helped the longhouse communities here,” he added.