Sunday, May 16
You are at:Home»News»Sarawak»Policies, plans in place to conserve wildlife 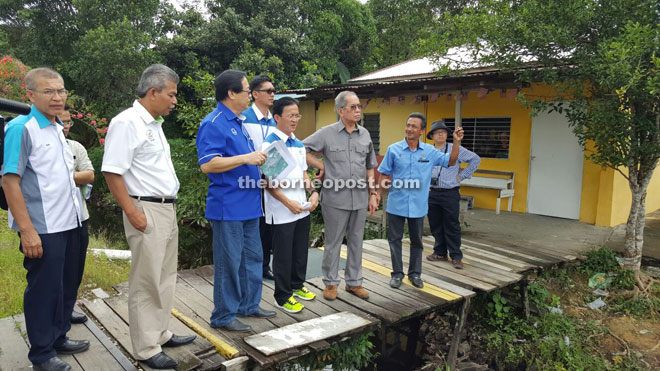 Wan Junaidi (third right) and his entourage at a village in Sri Aman.

KUCHING: The government has put in place several policies and plans related to protection and conservation of wildlife and its habitats as its commitment to the preservation of natural heritage and the intrinsic values they possess.

“These plans outline the actions to be taken by all stakeholders in order to achieve our vision of a future where wildlife and their habitats continue to thrive, especially our keystone species,” said Minister of Natural Resources and Environment Dato Sri Dr Wan Junaidi Tuanku Jaafar through his ministry’s press release after he officiated at an event in Sri Aman, held in conjunction with World Wildlife Day yesterday.

“As we chart our journey towards becoming a developed nation, let us not forget that every creation of God should be given due consideration for its life and its purpose in the intricate web of life on our planet. Today (yesterday) is World Wildlife Day, as proclaimed by the United Nations General Assembly on Dec 20 2013.

“The theme for this year’s celebration is ‘The future of wildlife is in our hands’ and this is an apt theme as we see that each one of us has a part to play in ensuring the survival of wildlife species. As humans, we are all intimately connected to our environment and its elements affect us and our lives,” he added.

He said the Malaysian government wished to reiterate its stand on the importance of wildlife conservation for the purpose of prosperity of our future generations.

Malaysia is blessed with a rich and very diverse range of wild fauna species from the smallest of insects to the largest mammals such as elephants. Each organism played an important role in keeping the balance in our diverse tropical ecosystems, from dispersal of seeds and soil tillers to agents of pollination, proponents of nutrient balance and crucial links in the food chain.

“These are just some of the many complex functions of wildlife around us,” he said.

Last year, the government renewed its commitment to the United Nations Sustainable Development Goals (SDGs) where there were goals to end poaching and illegal wildlife trafficking.

In this age of technology, wildlife was threatened by a new trend, the illegal online trading of wildlife.

“This is the challenge of a borderless society where cyberspace is the market and anyone can fall for the scams created by unscrupulous individuals and groups looking to make fast money from selling rare and ‘exotic’ animals which are not found in pet shops. The authorities have stepped up on cybercrime surveillance and have managed to nab several individuals involved in illegal wildlife trade on social media, and it is sad to know that many of them are people of a young age.

“As the areas for development become larger in size, humans are getting closer to the wilderness and this increases encounters with wildlife. With the unprecedented events of the deaths of tigers this year due to poaching and a road accident, as well as the increasing rate of roadkill involving other wildlife species, we look forward to having more experiences with building and maintaining viaducts as safe crossings for wildlife where roads are built. Such structures help to maintain the connectivity between habitats and ensure natural corridors are available for large mammals to move as they search for food and shelter. Habitat loss and degradation are major causes of wildlife population decline.”

Wan Junaidi also called upon every Malaysian to enhance their knowledge of the rich biodiversity existing in the country and the importance of protecting wildlife and its habitats. This is especially important for those communities living in close proximity with wildlife.

“At the same time, step up your effort towards appreciation of their roles and functions in the ecosystem. Be alert for activities that are damaging or have a negative effect on wildlife and its habitat and report activities that are against the law to the authorities. Play your part as the guardians of our natural heritage now; because once it is gone it will be almost impossible to bring it back. Every action counts and every effort is worth it. The future of wildlife is in our hands, let us all take that seriously,” he said.

Previous ArticlePandalela receives RM10,000 birthday present from Henry
Next Article SMK Chung Hua Miri shines again in SPM with 75 scoring 5As and above