Friday, August 12
You are at:Home»News»Sarawak»Thick smoke from fire at dumpsite has Mirians fearing the worst 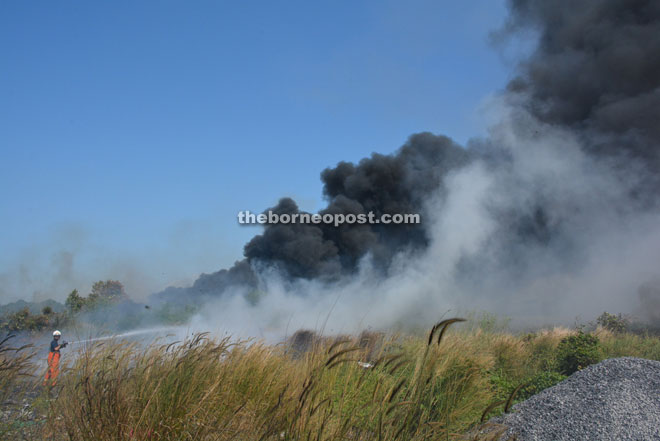 A firefighter puts out the fire at the rubbish dump site near Taman RBA in Lutong Baru.

MIRI: The thick smoke that was visible from Piasau, Tudan, Permyjaya, Senadin and even as far as Krokop had local residents deeply worried yesterday, with many fearing that there could be a massive fire in Kuala Baram due to open burning, or even houses being burned down in Tudan.

However, the Fire and Rescue Department confirmed that the billowing smoke came from a burning rubbish dumpsite near Taman RBA in Lutong Baru.

Nineteen firefighters from Miri and Lopeng stations were despatched to the scene on board two fire engines, following a distress call received at 2.35pm.

“At first, we were informed that the fire was at Tudan Phase 2, so we rushed there fearing that the fire had struck some of the houses in the residential estate, based on black smoke that we saw — which was really thick.

“However as soon as we arrived there (Tudan Phase 2), we found out that the smoke actually came from Lutong. We immediately turned around and went to Lutong,” he said.

Henry said although the fire destroyed about half-acre of the area in the dumpsite, he was glad that at least it was not a residential area.

It took the firefighters about half an hour to control the situation, avoiding the fire from spreading to the rest of the site.