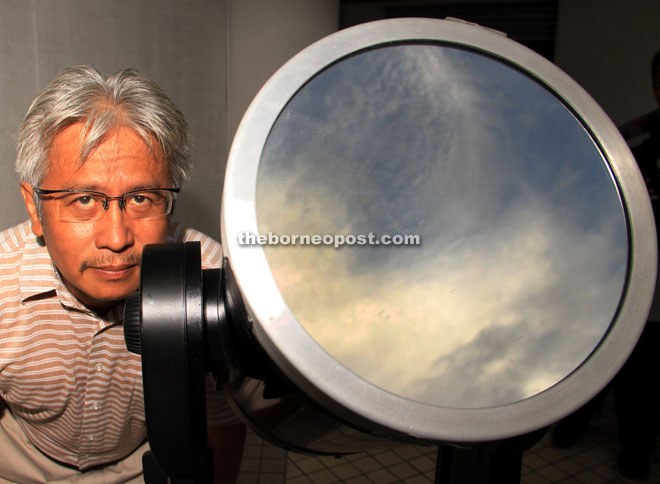 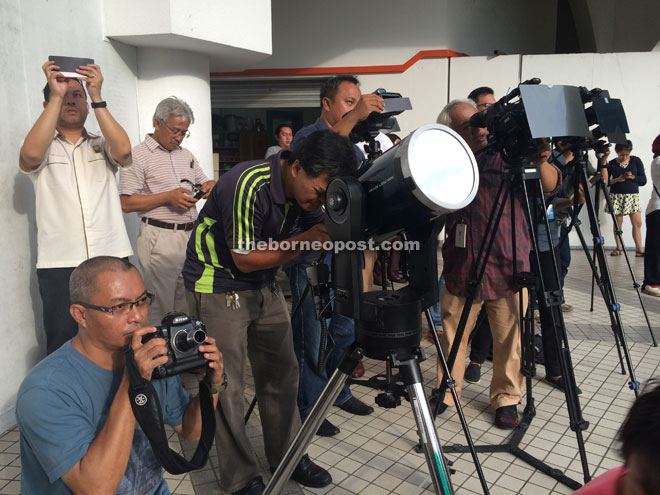 Press photographers and members of the public focus on capturing the eclipse. 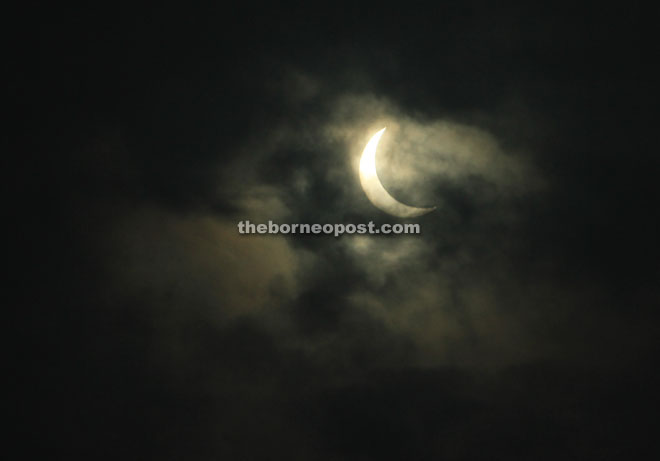 The eclipse viewed through a filter.

Alcila woke up early to view her first eclipse.

KUCHING: Despite the early morning rain in some parts of Kuching yesterday, viewers had a perfect view of the partial solar eclipse when the clouds cleared up long enough for sunlight to stream through.

The sun was seen as a crescent at 8.30am, while temperature cooled noticeably and birds were seen circling nearby after being confused into thinking that night was falling.

Also perceptible was the ripple of excitement passing through the group of eclipse watchers which included members of the media, watching the proceedings through solar filters, eclipse glasses or using the Meade LX90 EMC telescope equipped with a sun filter.

For many, it was their first time witnessing the phenomenon.

Alcila Abby, 24, arrived bright and early, armed with her own pair of solar eclipse glasses which she ordered online for RM14.50.

“I marked my calendar two months ago. This is the first time I woke up so early, at 5.45am. I took half-day off yesterday to attend the talk and another half-day this morning to come see the eclipse. I was here in time for the first contact.”

According to the National Space Agency (Angkasa) website, first contact is the moment the moon touches the sun’s disk, which happened at around 7.24am in Kuching.

Alcila, who was always interested in sky gazing and space, was excited about her experience.

“It was my first time looking through a telescope during the talk on Tuesday. I was really astonished and excited.”

Kuching is located closest to the path of the total solar eclipse, which will only occur within a narrow corridor traversing Indonesia and the Pacific Ocean.

“Today, we experienced about 87 per cent of the sun being blocked by the moon and at that rate, you can feel the atmosphere cool down a bit,” he said.

Rambli said yesterday’s eclipse was easily the best he had ever seen and that the conditions were perfect.

“Once we had a total eclipse in Bintulu, and it rained. When I woke up this morning, it was pouring rain and on the way here I hoped that we’ll get something. Fifteen minutes before and after the mid-point, the weather cleared up and we had a wonderful view of the sun.”

There were around 30 people who gathered behind the Kuching Civic Centre food court for the most optimal view of the eclipse.

The phenomenon yesterday was the only partial solar eclipse which can be viewed in Malaysia this year, the next one will be on Dec 26, 2019.