Wednesday, February 1
You are at:Home»News»Nation»Ahmad Zahid equates food security with national security
For the freshest news, join The Borneo Post's Telegram Channel and The Borneo Post on Newswav. 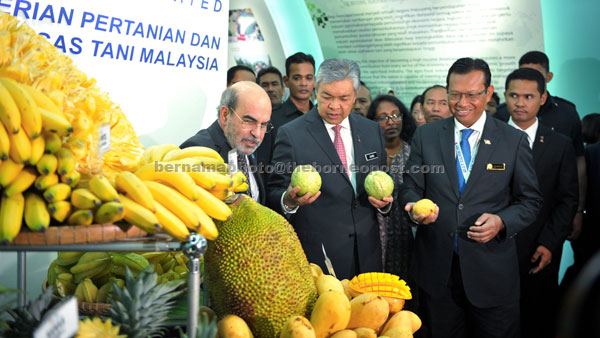 “We have seen too many cases where when a country collapses, food is unavailable simply because the national security is compromised,” he said, emphasising that that prerequisite to sustaining food security was national security.

Ahmad Zahid was opening the 33rd Regional Conference for Asia and the Pacific of the Food and Agriculture Organisation, here.

Saying that national security was a matter close to his heart as the Home Minister, he said production of food would not be feasible if a country was war-stricken.

He said he was committed to ensuring that national as well as regional security and stability were strengthened and maintained. “Only then can our food security agenda become a reality,” he said.

Ahmad Zahid also said that there was three approaches to ensuring food security and food sovereignty in the region.

These were stimulating private sector investment in agriculture, addressing climate change issues with sustainable agriculture and reducing poverty by utilising biodiversity, he said.

“I firmly believe that these three approaches can further spur the region to better development,” he said, adding that he hoped there would be active discussion on the subject for the benefit of member countries. Ahmad Zahid said Malaysia was one of the 72 countries worldwide that had achieved the Millennium Development Goals-1 (MDG-1) target to eradicate extreme poverty and hunger.

The five-day conference, being held at the Putrajaya International Convention Centre since March 7, is hosted by the Ministry of Agriculture and Agro-based Industry and attended by delegates from 46 Asia-Pacific countries. — Bernama