Monday, May 23
You are at:Home»Features»Stairway up a sacred mountain 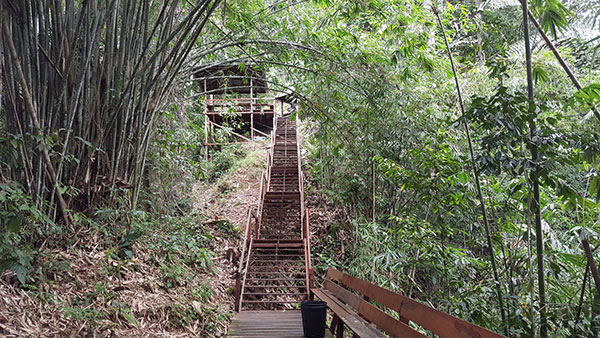 Bamboo plants form an arch over the belian staircase.

THE mountain has been a source of clean water for drinking, bathing and washing among villagers in the lowlands not just in the past but probably today as well.

The lofty area is also believed to be a habitat for at least 30 species of amphibians and 19 species of reptiles, of which 14 are endemic to Borneo. At least 20 species of birds, 22 species of mammals, 86 species of butterflies and 1,178 species of plants are said to belong to some 69 families in the vicinity.

Moreover, there are about 150 groups of under-storey plants found within the mountain which can be used for landscaping, medicinal purposes, timber and handicrafts.

Located between Bau and Matang, Mount Singai was the abode of the Bisingai for more than 400 years before the villagers moved down to the lowlands in the early 1970’s.

Legend has it that the Bidayuh Singai settlers at Mount Singai in the early 1800’s were from Kalimantan. They left because of frequent attacks by their enemies, and were looking for a place to start a new settlement. Their choice was Mount Singai where they established their villages about a quarter-way up the mountain for better protection. The steep slope provided an impregnable buffer against attacks.

In the early days, the villages — Daun, Moti, Puot, Sajong, Saga, Somu, Sudoh and Tuben — were situated close to each other, yet separately administered under a village chief. The overall leader was the Orang Kaya Pemanca, locally referred to as Raja, a ruler of great power and influence.

The people practised paganism where Gawai Adat was then the Bisingai’s religion. It was based on the worship of the ancestral spirit called Ieng Sumuk Ieng Babai. The people also believed in supreme beings and had some faint idea of God.

Along the pathways and in their farms, they were said to have planted fruit trees and cash crops, resulting in a mosaic of secondary forests and gardens while the forests higher up in the mountain were left untouched till now.

Mount Singai with its unique flat summit is, indeed, an iconic landmark gracing the skyline.

Today, the Bidayuhs from Mount Singai have moved down and resettled in villages called Sagah, Bobak Tengah, Browing, Daun, Sinibung, Tanjong Bowang, Tanjong Poting, Atas, Sudoh, Apar. There have been repeated calls by the Bisingai for the mountain to be protected in order to preserve the social system, cultures and traditions of the community.

A lot of folklore, arts and crafts — basket, mats, traps and the like — need to be conserved and only by safeguarding nature at Mount Singai can these cultural treasures of the Bidayuhs be perpetuated. 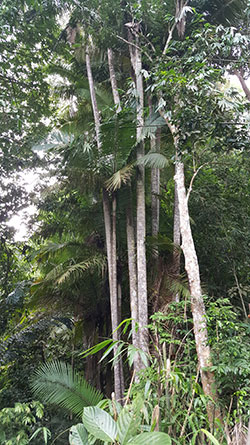 Tall palm trees are part of the flora of Mount Singai.

Together with my family, I recently made a day trip to Bau to ascend Mount Singai and see for myself the surrounding natural habitants and the flora and fauna.

For me, the forests in the area truly present an excellent opportunity for biodiversity and forest succession studies.

Along the belian plankwalk and stairway on the way up, we could see lots of large bamboo plants, tapang trees, palm (Arenga Sp) or ‘njuok’ in Bidayuh, ferns, wild flowers and fruit trees, especially durian and langsat, among others.

While taking a short break at one of the stations, I imagined what could possibly be around the entire mountain far beyond the Singai area. Perhaps, the forests are still rich in resources like the numerous ancient tapang trees and other huge hardwoods, fruit trees, bamboo for home flooring and walls and rattan for baskets and mats.

I also believe there are many more ‘njuok’ palms which produce a juice call ‘tuak njuok,’ normally consumed by men while socialising.

Checking out the area undoubtedly gives one greater insight into the history of Mount Singai — the cultures, the original settlements and the places connected with rites and rituals practised by the Bisingai centuries ago.

According to the Association of Research and Development Movement of Singai Sarawak (Redeems), the Mount Singai Study has been instituted and conducted by professors and students from Unimas and UiTM to collect data on the flora and fauna in the mountains of the typical Bidayuh areas.

Among the interesting discoveries is probably the smallest frog in the world on Mount Singai.

The comprehensive research was carried out in 2013 following a multi-disciplinary expedition, encompassing the entire Singai area, in 2010 by researchers from different institutions and agencies, including those from overseas.

The research, according to Redeems, covered the overall environment — physical, biodiversity, culture and religion of Singai area. The goal was to conserve these components as well as incorporate them into eco-tourism products.

Located just halfway up the mountain is a Catholic Memorial and Pilgrimage Centre (CMPC), which was blessed in November 1999. There used to be a small Catholic Chapel at the site for Bisingai Christian converts in 1885.

The CMPC area is quite interesting in itself, having a dinning-cum-community hall, hostel, chalets, public toilets, washrooms, generator-cum-storeroom, a retreat, flowing water from pipes and 24-hour electricity.

A new church in the shape of a Baruk, the Bidayuh ceremonial house, has also been built up there with a maximum seating capacity of 300.

There are also the Grotto of Our Lady, a caretaker’s house-cum-gift shop, stainless steel sculptures of the Risen Christ at the Centre and a car park at the foot of the mountain. Other facilities include a mini amphitheatre for about 1,200 people. 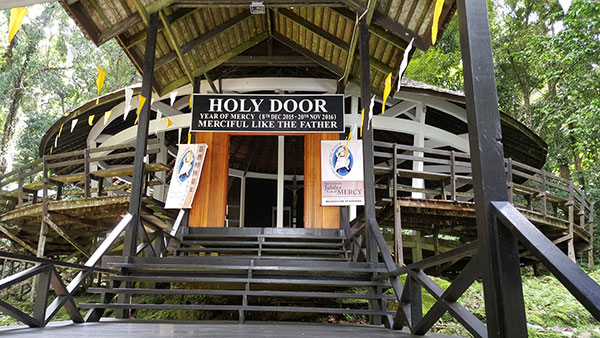 The church building in the shape of a Baruk.

The CMPC has a dual purpose — serving as a permanent commemorative venue for the ancestors of the Bidayuhs and the first missionaries, and as a pilgrimage centre for Christians.

What is most impressive is that the entire CMPC area is well-maintained and clean with buildings resembling country resort chalets — enticing enough for a visit.

Except for leaves shed by the surrounding trees, there is hardly any garbage up and down the mountain. Access is by foot only, starting from the bottom of the mountain. It takes 30 to 40 minutes for a normal healthy person to reach the summit.

The trail is quite steep in some parts, giving healthy climbers a moderate heart rate but it is a nice walk up overall.

People normally make the pilgrimage on Sunday but we ascended the trail on Saturday and it was quieter. It took us 45 minutes from the foothill to the CMPC. Coming down was quick and easy. But whoever wants to hike to the summit must seriously consider bringing adequate water as perspiration can be quite profuse.

Fourteen sculptures are found along the way to the CMPC, each about 15 to 25 metres apart and with a brief history of the Passion and the Lord Jesus Christ’s sacrifice for mankind on the Cross.

While walking up the trail, we could hear birds singing among the trees. The tailor bird was the noisiest.

In the past, the shrill call of this bird would deter the pagan people from venturing into the jungles or embarking on a journey. It was considered a bad omen.

Nowadays, it’s the CMPC that adds to the attractions of Mount Singai aside from nature. The centre provides a haven for prayers and recollections among Christians, especially devoted Catholics. It is also an Ecumenical Centre for the Archdiocese of Kuching and the whole of Sarawak.

As a Catholic setup under St Stephen’s Parish Bau, priority to use the centre is given to Catholics but other Christian denominations of the Association of Churches of Sarawak are welcomed to use the place when it is available on the condition they respect the Catholic tradition.

The St Stephen’s Parish Council organises a pilgrimage to the Centre on the first Sunday of each month except Palm Sunday, and on the Feast of Christ the King when Mass will follow the Feast Day.

Today, the CMPC has become a popular weekend destination for urban dwellers, especially from Kuching, as well as a tourist attraction. 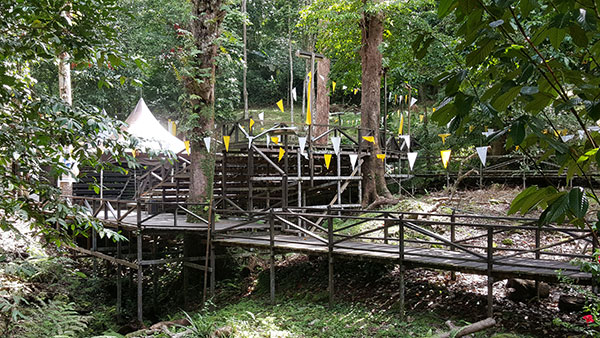 The amphitheatre at the CMPC.