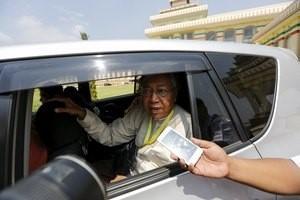 NAYPYITAW: Myanmar’s parliament elected a close friend and confidant of Nobel laureate Aung San Suu Kyi as president on Tuesday, making Htin Kyaw the first head of state who does not hail from a military background since the 1960s.

Suu Kyi led her National League for Democracy (NLD) to a landslide election win in November, but a constitution drafted by the former junta bars her from the top office.

She has vowed to run the country anyway through a proxy president, and on Thursday the NLD nominated Htin Kyaw for the role. He runs a charity founded by Suu Kyi and has been a trusted member of her inner circle since the mid-1990s. He is not a lawmaker.

“Today’s result is because of the love of people for her. It is the victory of my sister Aung San Suu Kyi,” Htin Kyaw told Reuters after the vote.

The NLD’s sizeable majority ensured a comfortable win for Suu Kyi’s pick in a vote by both houses of parliament. Htin Kyaw received 360 of the 652 votes cast, the parliamentary official counting the votes said.

Suu Kyi, who had been the first member of parliament to vote, clapped and smiled after the result was announced.

“This is the big day for us,” Zar Ni Min, an NLD lower house MP, said after the vote. “This is what we have hoped for since a long time ago.”

The still-powerful military holds a quarter of the seats in parliament and has the right under the constitution to nominate one of the three candidates for president. Its candidate, retired general Myint Swe, received 213 votes, making him the first vice president. 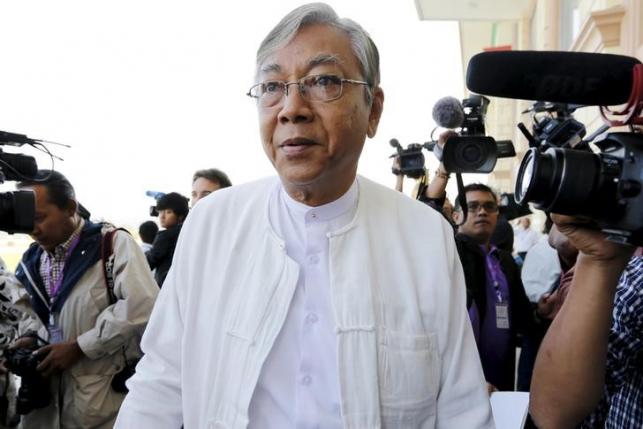 Central executive committee member of the National League for Democracy U Htin Kyaw arrives for the opening of the new parliament in Naypyitaw February 1, 2016. Photo credit: Reuters

Tensions between Suu Kyi and the military have simmered in the run-up to the presidential election and as her party prepares to take power.

Relations between the armed forces and Suu Kyi will define the success of Myanmar’s most significant break from military rule since the army seized power in 1962.

Suu Kyi wants to demilitarize Myanmar’s politics, but to do so she effectively needs the support of the military itself.

The armed forces are guaranteed three ministries under the constitution, as well as a parliamentary minority that gives them a veto over constitutional amendments – enough to limit the potential scope of Suu Kyi’s reforms.

Sources in Suu Kyi’s camp say she has grown increasingly frustrated with military intransigence on issues ranging from amending the constitution to relatively minor formalities such as the location of the handover of power.

NLD lawmakers also privately said the military’s choice of Myint Swe went against the spirit of reconciliation that Suu Kyi says she is seeking to foster.

Myint Swe served the junta as head of the feared military intelligence and is on the U.S. sanctions list.

The third candidate for the presidency, Henry Van Thio, was also nominated by the NLD. He will become second vice president and was chosen by Suu Kyi to represent the country’s numerous ethnic minorities. He is a member of the Chin ethnic group from the northwest of Myanmar.

The president picks the cabinet that will take over from President Thein Sein’s outgoing government on April 1, with the exception of the heads of the home, defense and border security ministries, who will be appointed by the armed forces chief. – Reuters